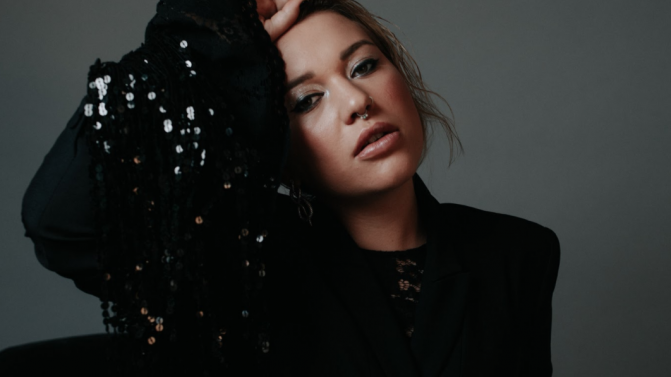 Local songstress Vendulka is well known about town for her smooth folk-pop performances. Now she has swapped easy acoustic melodies such as those seen in her song Good Words for a new style, and a new stage name to go with it too. She has made her first foray into electronica, releasing a debut single under the moniker Aya Yves.

Vendulka’s swapping strings for electronic grooves was done in collaboration with producer Xavier Dunn (who has also worked with Slum Sociable, Jack River, and Peking Duck). Dunn provides an understated backing that highlights the incredible qualities of Vendulka’s voice.

The music provides a shimmering backdrop to the verses, before leaping up in intensity to boost the choruses. (in)Sanity begins with lyrics delivered in a measured, tentative (almost reluctant) manner, set against wide spaced keyboard notes. It is a tale about two lovers, both damaged from previous relationships, falling into a crazy love affair as Vendulka sings, ‘Let’s leave sanity behind’.

In an unusual and clever switch, Vendulka delivers a riveting vocal bridge, a bold move that replaces the usual instrumental middle eight with vocalisations. This feature really sets the song apart.

Echoed vocals and subtle keyboard effects deliver a well-balanced song that is simple, yet enticing. The overall vibe is one of gazing into a deep, still pool composed of both desire and a fearful recklessness. A classy outro ends the track seductively with the drawn-out lyric, ‘Losing my mind’.

(in)Sanity is a great beginning for Vendulka’s new project with a single that is simultaneously exciting and elegant.