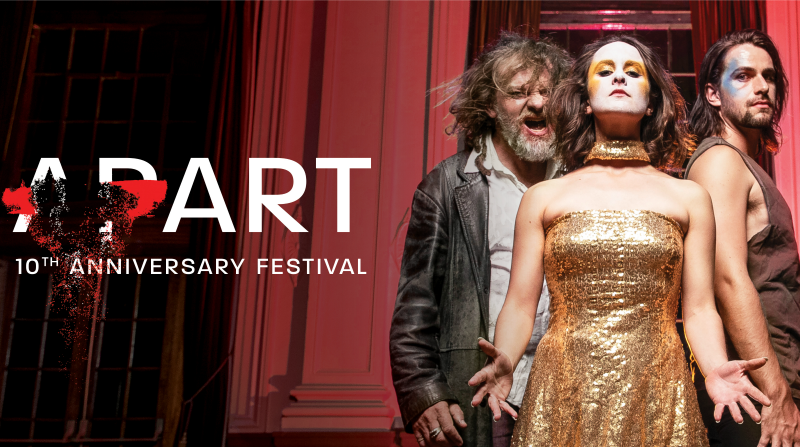 ART, NOT APART is finally here! After getting a tantilising tease from the Curators last issue, we now do a deep-dive into the many splendid things the team have conjured up for us.

For the full program and times, flick to the front of the mag either in the print edition, or in the digital copy found at the bottom of this article.

It’s unusual to see so many different kinds of art in one festival. Performances interweave throughout the festival day with sculpture, film, the Suitcase Rummage, live music and so much more.

I wanted to see the body in space without technology, without too many materials – just good performances. I was particularly keen to highlight the precinct that has been our home for so long. So, lots of roving and pop up performances. While most performers are local, we have a few from elsewhere including Anna Thomson whose clown show about climate change is super clever and fun. Her quote for the show is, “when things get this ridiculous, you send in the clowns”. The Anchor Theatre Company brings their new one-man show CIRCUIT exploring female gender stereotypes. In fact, the overwhelming themes of most proposals were climate and gender which makes sense given our theme of Today I, Tomorrow You.

Local artist Sammy Moynihan has recently returned from Brazil and Palestine and will be running a theatre workshop inspired by his experience of theatre in times of conflict. We haven’t run many workshops before but I would really like to see this element of the festival take off in the future.

Another highlight is a series of 5-minute lectures where women from various professions explore the festival theme.

And after a quick nap and frock change following Art, Not Apart, it will definitely be time to party through the night at Sound and Fury. We have a huge line-up of guests plus our fabulous Ensemble. My personal highlight is always the unique and diverse audience that truly makes S+F so darn special – all sorts of people watching live performance and partying. For me it doesn’t get any cooler than that.

Today I, Tomorrow You can be interpreted in myriad ways. The idea that change starts with us is a hopeful one but it requires a collective vision. It’s not a new dichotomy; we live in the binary of rich and poor, protesters and power mongers, belief in science and fiction and the reality of life and death. Art is a beacon for questions and resoundingly the artists are asking us to pay attention. The significance of art sometimes greets us down the track with a knowing wink, but in these times the reflex is instant – this is about climate change.

The Today I, Tomorrow You exhibition will be on view in the Nishi Gallery from 12 March through to 4 April and includes new work from byrd, Millie Black, Michelle Day, Sophie Dumaresq, Rinaldo Hartanto, Rachel Howie, Kevin Adrian Miller, Nikkayla, and Bernadette Smith.

This is shaping up to be a good year for street arts at Art, Not Apart. Each year we have more artists involved than the last and this year is no exception. The mix of graffiti and street artists is much more balanced which means we have a better diversity of letter writers and picture makers. We have a strong showing of great local talent such as PAW, Atune, GraffikPaint, Eddie Mo, REM, QuietOne and practitioners based in Sydney, Melbourne and the Gold Coast. I am particularly keen to see what the travellers bring with the likes of Mexican-born Sydney based Goya Torres, Canberra based Meldar Murals returning from a year abroad, formerly Canberra based Houl working in the USA, and formerly Canberra based Goodie now working from Melbourne, all making work for presentation at, or during, this year’s big 10th anniversary festival.

This year marks the tenth Art, Not Apart festival and we’re celebrating with several days of amazing programming around the core festival. A focus of our satellite shows and parties, Melting Pot, Sound & Fury and Tech-Yes will be stunning projection-mapping and visuals from Australian duo Tszuj Corp (Carla Zimbler and Mikaela Stafford) within Canberra’s beloved Albert Hall. You’ll see the iconic space transformed over these three days as the team plays with immersive, sound-reactive visuals and soft sculpture.

Something Art, Not Apart does really well is showcasing multi-disciplinary works. It’s something we strive for when curating the festival and I feel it brings audiences an experience they may not have been exposed to before. We’re lucky to have the Australian premiere of a powerful performance-art film, Text Messages From The Universe, which won best feature film at the Poland International Film Festival in 2019. It’s a unique viewing experience as the film is accompanied by a live, spoken-word performance that takes the audience on a journey into their own interior world of dreams in which time, space, and cause and effect logic are turned on their heads.

The National Film & Sound Archive will play host to the majority of the film and moving image program as well as several live music performances in Arc Cinema and the NFSA’s Theatrette including commissioned short films from emerging Canberra filmmakers, experimental analogue projection artists, and some of the region’s finest musicians.

Once the god of wisdom, Ibises are now the boganised bin chicken somehow stomaching Australia’s waste. But that waste should not be in our recycling! Left Lane Outreach Theatre will bin chicken out your recycling and make a debacle about contaminants so good resources don’t become landfill. With online memes to comedically haunt you.

Julia Boyd spurs hope for everyday climate action with charred found objects from bushfire zones and messages of lowering our environmental footprint. Her installation frames the lush Courtyard Stage. One action is proudly using a keep cup – decorate your own with Annika and Oliver at Mug Shots in Makeshift. Beside them are Clancy Baxter’s incredible Scents of a Future Earth.

Jennifer Forest also focuses on society as agents of change by turning climate science data into tactile installations to trigger that ‘a-ha’ moment. Spark! articulates Noam Chomsky’s view that a, “smart way to keep people passive and obedient is to strictly limit the spectrum of acceptable opinion, but allow very lively debate within that spectrum”. Her interactive sculpture Changing Views clearly show where and how Australian politics have shifted to the hard right.

Lightbulb Improv Theatre will collect insights into key life moments of people around the festival, and then stage a performance on how this affects much more than them, showing the interconnection of a culture that may feel individual today but needs to return to a shared field of meaning. Stefanie Lekkas approaches this same idea using string theory and a large world map for audiences to thread their meaningful journeys. The meta-patterns will show more than any individual can imagine, like our actions today.

This year’s music programme is truly a melting pot of sights and sounds – and yes, the pun is also intended to highlight our Melting Pot “jam experience” featuring improvised grooves and projection art at Albert Hall on Friday 13 March. (Get your tix!)

And that’s not all. I’m particularly excited to announce the reunion gig of much-loved Canberra band Dub Dub Goose who will be closing the Soul Defender stage. For the little sprouts, we’re thrilled to bring indigenous performer Helen Moran of Wombat Wobble fame, and nine-year old rising star producer GHOS7. The future is in good hands if he’s leading the way.

There are also plenty of multi-disciplinary and interactive musical works to experience, from the likes of the very zen Cris Clucas Sound Experience, Alex Raupach’s Line is Drawn which is an immersive soundscape experience in Arc Cinema at NFSA, and the poignant and eco-conscious Milk Carton Confessions by Michael Sollis. I highly recommend checking out the aptly named Rose Room in Makeshift featuring performances by Happy Axe and Aphir, as well as the retrospective protest performance The Revolution will be Televised.

Finally, bring your bike along to join the Party Peloton presented by Communi-fi and Rat Patrol which will take riders on an artistic journey around the festival surrounds featuring exclusive performances and experiences.

Like I said – it’s one big melting pot, and I love it. So will you.

Art, Not Apart is on the weekend of Friday, 13 March – Sunday, 15 March. Check BMA for full program and guide.