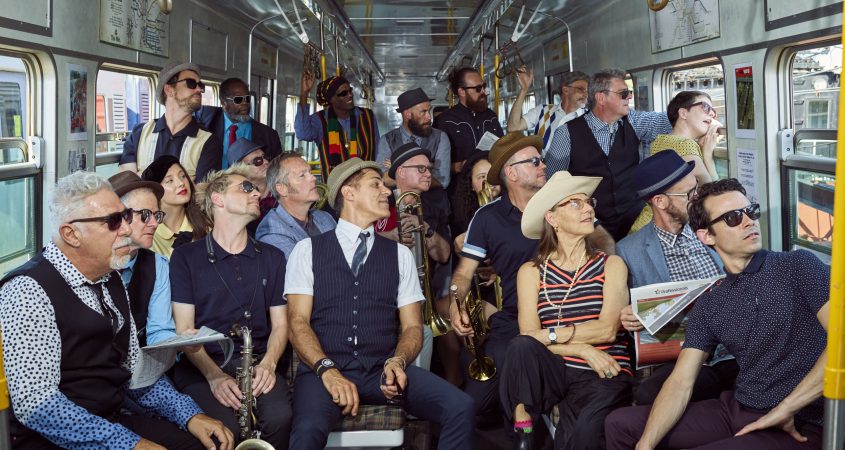 The first thing that’s clear when you talk to Nicky Bomba, the commander-in-chief of the MELBOURNE SKA ORCHESTRA, is his passion for community. Even his 25-strong band aside, Bomba runs a community hub/workshop/gig space/recording studio (etc) and helps his daughter run her own fashion label. It’s all about, “celebrating everybody’s values, or everybody’s worth,” Bomba says. “I see it as 25, 30 amazing minds that can be shared and tapped into, and it becomes a creative hub”.

Given ska’s rich history as a performance art Bomba loves the history of the genre. “Every week, they’d write a new song to get people to come to their sound system, so rather than getting a gun and saying ‘give me my money back’, I’d write a song, I’d say ‘ah where’s me money’ and I’d say come to our sound system this weekend because we’re gonna play that song about blah blah blah, and that’s how they’d get people to come to their shows”.

And so was the rationale behind their four-part 52-track record One Year of Ska, and part of their psyche.

Once again, this is a twenty five person band, recording and releasing one track, every week, for a whole year. It netted them the World Music ARIA. But just… How? “It’s a military operation,” Bomba says. ”Who’s writing what, what song, who’s doing the arrangement for this. It was kinda a happy discipline. How this band works is a big dose of love for the music. We’ve never had any problems with anyone; everyone gets it.”

An impressive accomplishment considering that, despite the band’s recent record containing 26 covers – half ska classics and half theme songs – Bomba’s confidence in the live show comes from being able to improvise to create something new.

“One of the great things is the band’s ability to go off on a tangent, as a unit,” he says. “Stop on that, give me this, give me this chord; and we’ll go off to make a new groove. You don’t see that with a duo or a trio because there’s not really that musical flexibility, or that trust. That’s one of the breautiful things about the band.

“Performing live is to create a sense of unity and community, to raise the vibrations of who’s there,” Bomba continues. “We’re creating a beautiful electronic bubble between us and the audience, so that at the end of the two hours you’ve been taken somewhere.”

That’s Bomba’s take on the live show – it all comes back to community, to raising the vibrations in the room to bring everyone together. With such an ethos, and the hardware and success to back it up, their first Canberra trip is sure to be a winner. Don’t miss out.

The Melbourne Ska Orchestra hit the UC Refectory on Sunday, 15 March. Tickets 40+b/f through Moshtix or the band’s website.