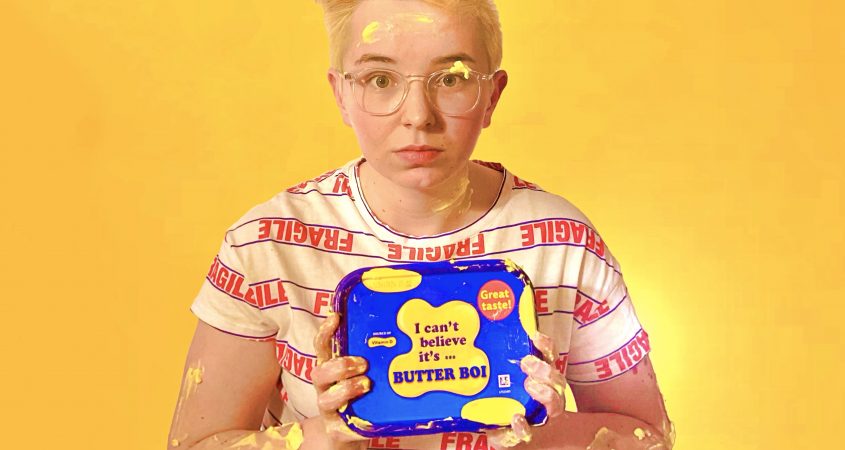 [FRANKE McNAIR] Your show… Hit me.

This show WILL make you gay, so if you’re coming make sure you’re prepared to become one of the 10%. It’s about climate change, eco anxiety, and how to overthrow the government. But when I named it, it was just about butter!

I‘ve grown a lot as a comedian and I’m really excited about this show. It’s $20 worth of fun that you won’t regret!

There was a brief period in your life where you owned 23 swords…are you still obsessed with mastering the blade?

I only own 7 swords. I had to sell them to fund my new addiction: P2 masks. I’ve deferred blade studies. Very sad. The end of an era. I’ll always have the memories and the scars from when I played fruit ninja IRL in my backyard.

Favourite thing to put butter on?

Do you have any goals for what you’d like to do in comedy?

It started as an elaborate way to meet Kate McKinnon and get her to fall in love with me. I have a girlfriend now who I love a lot so I’ll settle for Kate pining over me.

Also, all the terrible gigs. I can’t say no to a gig. It sucks so much arriving to a gig and realising it’s going to be terrible but it’s too late to back out now. My next gig is in a caravan for some retirees. Can’t wait to cry after!

I’ve met the best people in the world through comedy. Hanging out at gigs and seeing them grow as performers is great. Also, whenever anything terrible happens in my life I’m 50% sad about it, 50% excited at new material. It’s a great coping mechanism. Give me that content baby!

To avoid public embarrassment: if you push or pull a door hard enough, you’ll be right either way.

Butter Boi is on Thursday, 17 March at 7pm at the Civic Pub. Tix can be found on the Canberra Comedy Festival website. For the price of four mediocre coffees you can get one hour of GREAT comedy. I’ll even make you four instant coffees during the show if you want. Please.