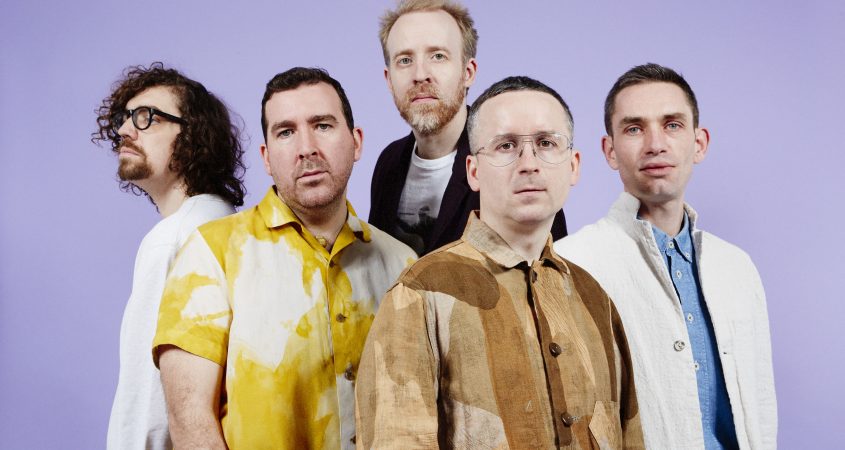 Electro-pop wizards Hot Chip are inbound with a trunk full of synthesisers and A Bath Full of Ecstasy. The seventh of their studio albums, is a trove of wibbley wobbley vibes; their classic pop and dance sensibilities get a more laidback treatment, with languid currents and bright moments that call back to the 8 and 16 bit gaming era.

“It’s just a playful, slightly silly type of album title. We struggled with the title. We were desperate to not name it after one of the songs because that’s what we always do; it happens every single time. We were aware that it might have connotations to do with drugs, but it’s Alexis’s lyric and Alexis is the least druggy person ever. He’s very clean-living.”

For a dreamy record spawned by the UK’s most hardcore indie-nerds, its roots are pretty far from what you’d expect. A song-writing session with Katy Perry for her album Witness (2017) resulted in the Perry song Into Me You See; and two others that Alexis Taylor [vocals, synth] and Joe Stoddard [vocals, synth] kept. The reworked Spell and Echo represent two of the albums more upbeat moments, with earwormy hooks and fizzy riffs. But how do you get from surplus pop songs to a full-blown Hot Chip bubble bath?

“It’ll often be in methodology rather than the concept,” says Martin. It’s more we want to write an album where we record collaboratively with people, or that we want to try a production technique. It’s about the method.”

The method this time was working with outside producers, not a typical move for Hot Chip. Producers Phillippe Zdar and Rodaidh McDonald were invited to bring fresh perspective and push Hot Chip develop to their sound.

“Working with producers is a different way of working because it gives you another pair of ears into the equation that will have an opinion of things too. And it frees up Jay who normally does the production. He can focus on playing.”

Zdar, half of the French duo Cassius, produced for acts like Phoenix and the Beastie Boys. Zdar sadly passed in an accidental fall from a window in July of 2019, only two days before A Bath… and Cassius’s own Dreems were released.

Zdar’s influence can be heard clearly throughout. He leaned on the band to embrace the electronic elements more fully, and McDonald urged them keep the songs and album taught.

“It’s criticism of albums we’ve done before that they’ve maybe been a bit flabby,” says Martin. “That’s the thing about being an eclectic band; you have different kinds songs that appeal to different people. That can make the albums less focused.”

At nine songs, A Bath… is Hot Chip’s shortest album and has been praised for being a sleek entry into their discography, Q Magazine calling it “A glorious concentration of HC’s skills”.

“We always end up with far too many songs at the end of these sessions; we’ll have 20 or even 30 tracks. When you distil it to a much smaller number of songs it adds more focus. It’s just choosing what is cohesive and what seems to complement the other songs the best in that selection.”

The extra songs don’t go to waste, though, whether they’re used for solo projects or make their way to fans in another format.

“They usually see the light of day. We often release an EP after the album. [After] the last album there was the Separate EP that had four songs on it that a lot of people actually preferred to what was on the album—I think we messed up ’cos we kind of chose the wrong ones, so that can happen as well!”

While it wouldn’t be a Hot Chip record without at least one banger, A Bath Full of Ecstasy overall is a slow-blooming nostalgia bomb. In translating it to a live show Hot Chip keep it faithful to the record—despite the challenges of almost every member being the synth player.

“I don’t know if you’ve ever seen the band before but there’s seven people playing. We spend ages coming up with these parts and the details of how we’re going sound. When you’re using a lot of synthetic sounds then everything can overlap so you have to think carefully about the interactaction and what kind of frequencies they’re going to have, because the instrument is capable of producing a wide variety of sounds. It gets quite kind of orchestral. The rehearsals are intense.”

With a 20-year career behind them, Hot Chip are veterans of the festival circuit, releasing albums at two or three year intervals and touring hard in between.

“In 2019, we toured pretty much from March until December. It was the longest tour we’d ever been on. I was just exhausted. I was a broken man. It’s been nice to have a little break to be kept fresh, and then this year we should be a bit more relaxed.”

Hot Chip are touring from February, starting in India before hitting Australia to join the Farmer and The Owl festival as headliners. And then, dear Canberra.

“We’re looking forward to bringing the show to Australia, and to places like India where we haven’t ever been before.”

Hot Chip are playing at the Kambri Precinct on Sunday, 1 March at 6pm. Tix are $79.90 from https://moshtix.com.au