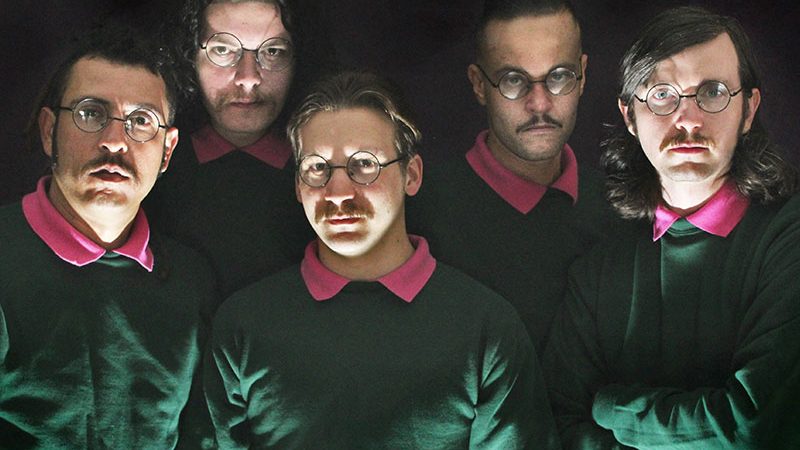 Not much, actually, but Okilly Dokilly are headed down under to scream about it.

You’re touring with local boys Dr Colossus. How do Simpsons-themed hardcore bands find each other? Is there a newsletter?

I wish! That would make it soooo much easier to find openers and things. Dr Colossus—so back in 2015 when we first put our press photos online and ended up getting this weird viral boost, we discovered Dr Colossus. There were a lot of news articles that said like, ‘Oh, Simpsons band? Well there’s already this band in Melbourne…’ and that’s when I became aware of them.

To date I haven’t really found many other Simpsons bands. There was one in Canada called The Be Sharps that did covers of actual songs from The Simpsons. Other than that there haven’t been a ton. So finding a Simpsons-themed doom metal band was excellent. As far as bands on the planet that are perfect bands for us to play with, Dr Colossus is easily that band.

When we first announced the Australia tour they were the first band that I reached out to with promoters and agents. As far as openers went, I was like ‘No! Only this band! If they can do it, only them,’ and everybody was on board, so it’s great.

When you played your first shows did the viral attention translate to bodies in the mosh pit?

It did, and it was very strange. The first tour that we ever went on, we were the opener for two headliners; a band called Mac Sabbath, which is McDonalds character-themed Black Sabbath covers. They’re phenomenal. The other band was called Metalachi, which is a heavy metal mariachi band. Full mariachi instruments but they’re playing AC/DC and Metallica covers [I want to go to there – BOSSMAN AL].

Having never toured before and being the opener on the tour was crazy; to go to these places and end up running out of merch. A lot of people were there and said they came for us and that was very cool.

We’ve always had an appreciation for bands that go on tour; it’s gruelling when there’s just a couple of people in the room each night, but then when they come back there’s more and more.

We had this viral skip to the middle level of a band, and that was really cool to be able to just drop our jobs and tour and come back not ten times as broke as we were.

I can’t begin to imagine the crowd that kind of tour would draw.

Oh, it was wild. People were weirded out and having a blast.

When you started out, was the plan to tour, release demos, build a fanbase? Or was it just, ‘Hey, this’ll be funny,’?

Entirely the second one! We never intended on touring. The whole idea was, ‘Let’s form this band, and maybe play, like, two local shows’.

There’s a couple of venues [in Phoenix] that notoriously put on shows with far too many bands; it would be like seven or eight bands on a Tuesday night. And we were like, ‘Let’s be one of those bands and get a logo that’s so illegible, like one of those super metal logos. It’ll say Okilly Dokilly but nobody will be able to tell and then we’ll go onstage and we’ll be in the Flanders outfits and all the songs will be Flanders quotes’. Just very tongue-in-cheek.

And then we put our press photos and the demo online and ended up with 20,000 Facebook fans in a week. That kinda changed our plans of being this unknown Tuesday night comedy thing. Now we’re heading to places and they’re filled with people who are showing us Simpsons tattoos and referencing episodes.

What’s it like having this character that you threw together for two gigs that’s now a proper stage persona? Are you consciously getting in character before you go onstage?

Yeah, definitely. One thing we did on our latest US tour; the van had a DVD player. So we grabbed our copies of The Simpsons and watched nothing but that while driving from place to place. That was a great way to get in character and live in this wild Simpsons world. Any time Ned appears I’m picking up tips and quotes and things like that.

And once you get into the sweater the mentality comes out and it’s easy to get into that heavy Nedal headspace.

You had a total line-up changeover between albums. How do you recruit for a metal band with a sweater and collared-shirt dress code?

It’s funny how gung-ho and open to being in this band people have been. Even at the start, this was just to be something fun; the songs will be simple and heavy and that’s how we ended up with the synth in the band, ’cos it was just a friend of mine.

Since then we did some touring, but because the band never intended to tour none of the guys really were set up for that. Our drummer had already had a family and the other guys had jobs. Thus the change over with musicians who were set up for touring. And yeah, asking all of them you kinda present this crazy idea, ‘Hey do you wanna be Ned, and you know, wear a sweater on stage?’

At the onset of it everyone’s like, ‘Yeah, that sounds fun’. Then we toured in Texas and Florida during the hottest months of the year and now everyone’s like, ‘Alright, it was a little less fun than I thought it’d be. But still fun’.

Was it challenging recording your new album, Howdilly Twodilly, with a whole new line-up?

No, not terribly challenging. We approached it differently. All our songs are primarily direct Ned Flanders quotes—the first album was songs from quotes that I already knew or were more popular: Nothing At All, and White Wine Spritzer, and things like that.

For the second album I actually had more of a process. I sat down and watched the first ten seasons of The Simpsons over the course of a month and picked quotes. I wrote about 20 songs and then we did it piece by piece, and I would set up a structure, then we would add drums, and we would add bass and add synth.

So I found it a little bit easier to do the second record, just ’cos we had learned a little bit, we knew a little bit more what we wanted to do. We knew how we wanted to set up some of the songs for live shows too. Like I Can’t, It’s a Geo was built to be a live song because we point at the crowd and ask them to shout ‘faster!’ between every break, and just play the song faster and faster.

Would it be fair to say Howdilly Twodilly has kind of a slower, dark melodic Nedal sound than your first album Howdilly Doodilly?

Yeah definitely. I wanted to do a lot more melody, a lot more difference between choruses and verses and make it just a little bit more technical. That was the mentality. It shifted a lot because we plucked and picked the best of the 20 and the ten we picked ended up being those more melodic songs.

One of my favourite songs on the record we weren’t able to use because I found out I misquoted Ned, which doesn’t fly. I was double-checking the record and I’d misquoted him so we pulled the full song and went back, re-recorded all the vocals. That song is called Slaughterhouse and we’ll actually be releasing it ahead of our Australian tour. It’ll come out on the 31st [January] so I’m excited to get the correct Ned-quoted version of that out for everyone to hear.

That’s a phenomenal level of attention to detail.

Part of it is. There’s a process where within the liner notes of the album I note the season and episode that the quotes came from. I was going back through my notes, pulling that and rewatching some of the stuff. I was like ‘Ahhh, I misquoted it’. So I called our engineer. We were touring at the time and called him. ‘You gotta pull the record; it’s not direct Ned’.

Can you still relax and enjoy The Simpsons or are you automatically Ned-quote-compiling in your head?

I’m still compiling quotes. Like even when I’m not writing songs. But I can absolutely relax and watch The Simpsons, but I have noticed I’ll be in the kitchen trying to put something away and then I hear Ned Flanders’ voice and then I just shove whatever’s to hand in the dishwasher and get back to the TV – ‘What if I’m missing a quote that somebody quizzes me on at a show or somebody mentions later? If I don’t know I’ll lose my Ned cred!’.

You went to the first ten seasons for material for Howdilly Twodilly. Is that because it’s the golden age of The Simpsons or was that about keeping it to quotes that people would know already?

Definitely a mix. I do think those early episodes are part of the golden age and there’s definitely more recognisable quotes and things from there. Part of it was that. Part of it was just starting from the beginning and if there is a Howdilly Threedilly then I’ve got seasons 11 through 20 to pull from.

But yeah, it was those three factors. This is the golden age; these are the quotes that people recognise; and this works chronologically.

And finally, you’re the band’s mandolin player. How did that come about, and what inspired you to bring it to metal?

When I was first learning instruments it became a weird addiction. I learnt how to play guitar first and then got bored with it. I notoriously have a pretty short attention span, which has helped and hindered with many things. But I played guitar for about six months and then wanted to learn a new instrument.

I played bass for about six months and then ended up getting a drum kit six months later. Every few months I would snag a new instrument and mandolin was one of them.

In fact, death metal screaming was one of the instruments that I was like, ‘Hey let’s try this; this’ll be fun to learn,’.

So yeah, mandolin was one of the instruments that was attainable and I was able to learn and then we thought it would add some humour on a death metal record, where there’s all this metal to bring out mandolin, which is traditionally one of the most un-metal instruments—or at least fairly un-metal. On our songs Folkilly Dokilly and then on Panic Room on the first record I’ve always done the mandolin parts.

We’ve brought it on tour and played it live as well. It’s fun to bring that out. People kinda cheer for the little tiny guitar.

Okilly Dokilly are playing at The Basement on Wednesday, 12 February at 7pm. Tix are $45.15 from https://tickets.oztix.com.au