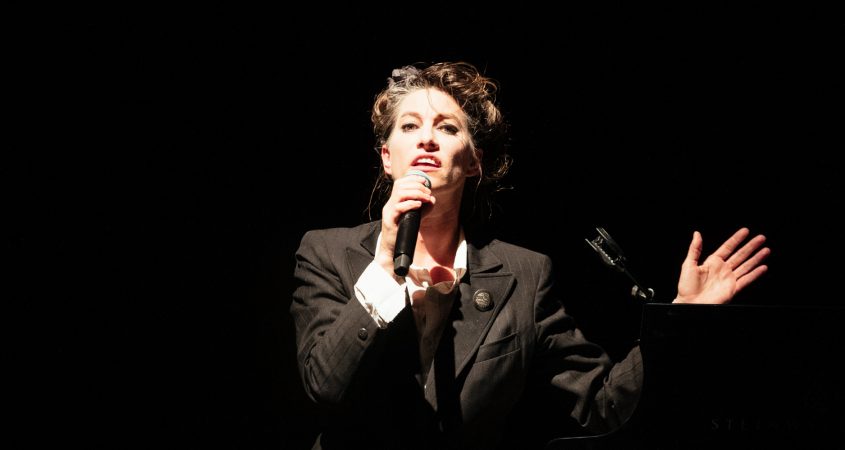 I’ve got to admit, I didn’t go into my interview with Amanda Palmer knowing a whole heap about the performer. I knew she was in the Dresden Dolls, I knew that song Coin Operated Boy, I’d watched her TED talk about The Art of Asking (worth a watch if you’ve not seen it).

And, to be honest, in a way I’m glad I left the majority of my research about Amanda Palmer until after the interview. While I didn’t really think she was the kind of person to “walk the line” so to speak, turns out there’s way more controversy surrounding Palmer than I realised. Her career, opinions, and some of the ways she approaches certain topics have been questioned and criticised by fans and haters alike.

For example, reading about the show, Evelyn Evelyn, that she toured with collaborator,Jason Webley in 2010, makes me question Palmer’s knowledge (or lack there of) of ableism. There was a lot of controversy around that show and many criticised her for putting on a production about conjoined twins when she does not herself live with disability. I’m sure with the backlash that she endured after this show was produced and in the decade since its debut, she’s probably more aware of this topic than she once was.

Whether you agree or disagree with the actions of Amanda Palmer, however, one thing that’s unanimous is her ability to generate discussion around her art, and, around topics that that art relates to.

Which is exactly what good art should do. It get tongues wagging. It gets important conversations happening. It shows the vulnerability of humanity and it evokes a response. I think the sign of an excellent artist is one who does cause controversy and who tasks risks around the possibility of putting their proverbial “foot in it”.

Her most recent solo LP, There Will Be No Intermission, undoubtedly does all of these things. From 2012-2019, Palmer wrote songs about “some of the most difficult years” of her life. Addressing topics like abortion, losing a friend to cancer, and resilience in the face of criticism, Palmer says this work is her “most human and vulnerable stage show to date”.

The album tells the story of Palmer’s life. If the songs weren’t “super personal” they got left off the album.

“It was a concept decision”, says Palmer.

She says that the stories she tells in the stage show, both in the form of song and generally talking to the audience are “pretty gnarly”.

“I took it upon myself to do something scary, [for example] talk openly about abortion, talk openly about childbirth, and having a miscarriage, and losing my friend to cancer. And it might sound like the show is really morose but it’s actually the funniest show… and I think it has to be because of the subject material,” laughs Palmer.

She says the songs, “were therapeutic to write and are also therapeutic to play every night.” When I asked whether she was nervous about sharing any of these songs live with her audience, given their intensely personal nature, her answer was a fairly confident, “not really”.

“I have such a deep and trusting history with my audience that I actually just find it delightful, even though the subject material can be so difficult. Because it always feels wonderful to be among my community.”

Starting her career as a street performer, mainly busking in the form of a character dubbed The Eight-Foot Bride, Palmer quickly learned the art of connecting with people around her. While some people yelled “get a job” from their car windows, others stood with her as she held their gaze and experienced a true and intimate moment of raw human connection.

From this, Palmer realised a truism that has arguably been the backbone of her fanbase and a major key to her career success ever since. She realised that by giving people the opportunity to give by simply asking her fans for help if and when she needed it, she was able to connect with her supporters on a deeper level.

Fans all over the world have offered her accomodation, home-cooked meals, rehearsal space and more, simply by putting the word out. The community she’s created with her music continue to support her along the way.

This method has not come without its criticisms. Particularly when it involves asking her more musical fans to contribute their talents to her shows in exchange for “beers and hugs”.

However, I agree with her sentiment of asking. It gives people the opportunity to say yes or no. And while I don’t necessarily agree with Palmer not paying fellow artists, I do believe in artists being empowered to know their worth. I wonder how many of the artists who’ve performed at Palmer’s shows over the years have asked Amanda for payment?

And if you’re worried about whether this show is for you or not because of the intensity of the material, Amanda says, “don’t be”.

“I have never won over more random strangers,” she laughs, “being dragged into the show by their children or by their partners or whoever. I wanna remind people that even if you’re afraid to come to the show, just buy a ticket and come alone because you will probably leave with friends. That’s what’s been happening on this tour.”

There Will Be No Intermission is on at the Canberra Theatre Centre on Friday, 7 February at 7:30pm. Tickets can be booked online via www.canberratheatrecentre.com.au or by phone on (02) 6275 2700. If you have any access requirements, just chat to the friendly staff.