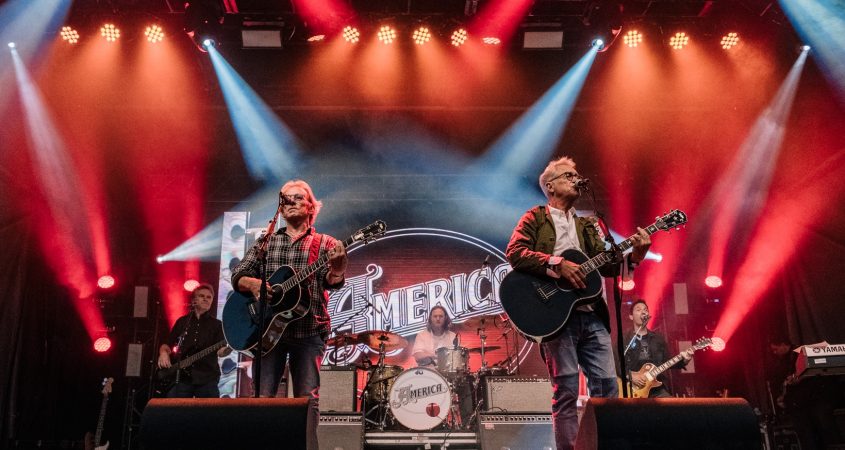 Prolific 1970s soft rock band America has survived longer than most of their previous peer that have fallen by the way side because of natural causes, age, or miscellaneous rock ‘n roll lifestyles.

But here the duo stand, celebrating their 50th anniversary as a well celebrated band.

Opening act Mitch King weaved a southernly spell on the crowd. The young guitarist has a soulful voice, embodying Aussie artists like Pete Murray and Russell Morris. King made light work of his 12-string guitar during his hit song Coming Back that has both a rumbling stream train beat and the licks to make the likes of Angus Young even blush.

The stage fell black as the backdrop became littered with archival footage and images of America’s grandiose musical history of the half decade. A number of darkened bodies stepped out to their respective places, and soon jumped into the snappy hits Tin Man, You Can Do Magic, and Don’t Cross the River.

The ballad from 1975, Daisy Jane, made every patron attending melt into their seats as the euphoric piano twinkled along with the guitars strummed. A true soft rock lullaby.

The crowd bellowed and cheered as the signature guitar riff to Ventura Highway rang out. I am certain, if the show was an outdoor event, lighters would have been thrusted into the air and sway accordingly.

The performers took a moment as co-lead singer Gerry spoke about their time working with the acclaimed George Martin who produced three of America’s singles through the mid-1970’s. This was the perfect segue into The Beatles’ number Eleanor Rigby – which Martin was famous for producing. Ask the modern music history buff and they would tell you that Martin was known for working alongside Gerry & The Pacemakers, Little River Band, Kenny Rogers, Michael Jackson, and Kate Bush just to name a few.

The punchy hit The Border garnered a small dance floor as revellers stood up in the seats – regardless of who was sitting behind them. That is the true power of good music: dancing like no one is watching.

The Reggae tinged Woman Tonight still grooved hard after all these decades. America spoke about their history, how far they have come, from the days of opening for acts like Rod Stewart, Pink Floyd, and The Who. To commemorate all the bands and acts the duo had played with over their career, America played The Mamas and the Papas’ hit California Dreaming; the backdrop shimmered with autumn leaves and shades of ochre. It was apparent that age would not slow down the core duo – “If you guys keep comin’ along, we will keep playing”, said Gerry, brandishing his Taylor guitar proudly.

The projector illustrated the powerful song Sandman with images of Woodstock, Easy Rider, the Vietnam War and Martin Luther King with the crescendo of galloping guitars ending in a momentous blast. The mega-hit Sister Golden Hair stirred the crowd into another seating arrangement dance floor.

As an encore, the band broke into the signature anthem – Horse with No Name. The vast majority of the crowd arose to join in unison as the crowd came in.

“See you next time”, farewelled co-lead singer Dewey as he thrusted a gleeful wave into the air, ending a triumphant celebration of a 50-year career (and counting).

Support Andrew Myers on Patreon!
11% complete
When we reach $500 per month we will begin the official BMA Podcast. This will include interviews with some well-known musicians and artists, tips and tricks for publishing in print and online, as well as other discussion topics around Bands, Music and Arts in Canberra!