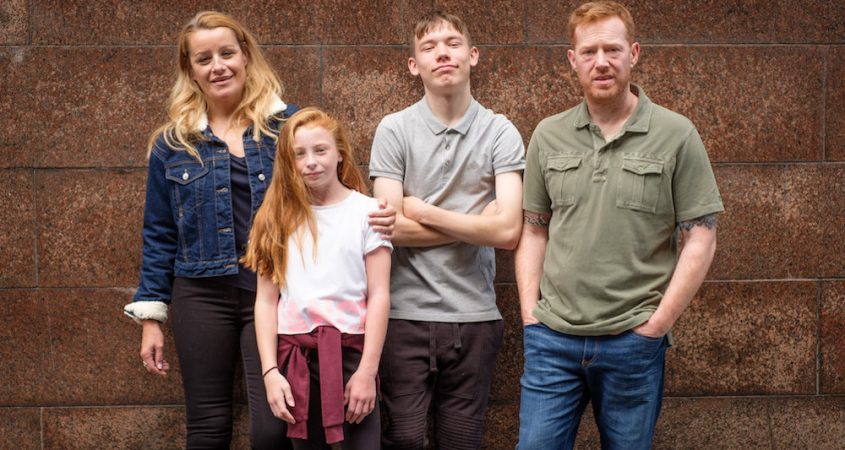 A Ken Loach film opening on Boxing Day. What are distributors and cinemas playing at here?  Are they maybe cashing in on the despondency of the post-Christmas blues, trying to make you feel better by depicting families and situations that have it much worse than you? Or maybe it is just clever counter-programming to cater for those not interested in Star Wars, Jumanji or creepy-looking singing cats.

Whichever the case, Sorry We Missed You (not to be confused with the dark comedy Sorry to Bother You from last year) is a cinematic gem.

Set in Newcastle, England, it tells the story of the Turner family and their struggles to stay afloat in the current economy. Father Ricky (Kris Hitchen) decides to take a job as a delivery driver (with a boss that is scary-dreadful from his very first scene), whilst his partner Abbie (Debbie Honeywood) is a home-visit carer for elderly and disabled clients.

But the reality of their professional lives eventually hits a vast sequence of hurdles – Ricky is supposed to purchase his own van as a franchisee rather than an employee, even though his hours and conditions are decided for him. Consequently, they sell the family car, which means Abbie has to catch the bus to her clients. They also both end up working long hours, which places pressure on their children as well.

Ken Loach films are not popcorn entertainment, but a reality check on society designed to perhaps wake us from our complacency. Or they may be too real for many cinema-goers, who would understandably veer away from this type of art towards more escapist fare.

The key to the success of Loach’s cinema is down to the powerful screenwriting of Paul Laverty, Loach’s partner-in-film since the mid-90s. Laverty manages to distil the stories of the economic victims, from policies like Brexit and the gig economy so as not to come across as preachy, but instead draw you in to the realities of his characters’ futile situations.

It’s a powerful technique, and you often find yourself gripped by the storytelling whilst also recognising that not much is actually happening apart from regular routines. And then, when certain turning points occur, including the ending, you realise that Laverty has managed to connect you emotionally to his characters, and you start weeping, raging, or descending into numb shock at the situations portrayed.

So, yes, this isn’t your Boxing Day feelgood film, but damn, is it a fine piece of art that deserves your attention (if you can bear it).