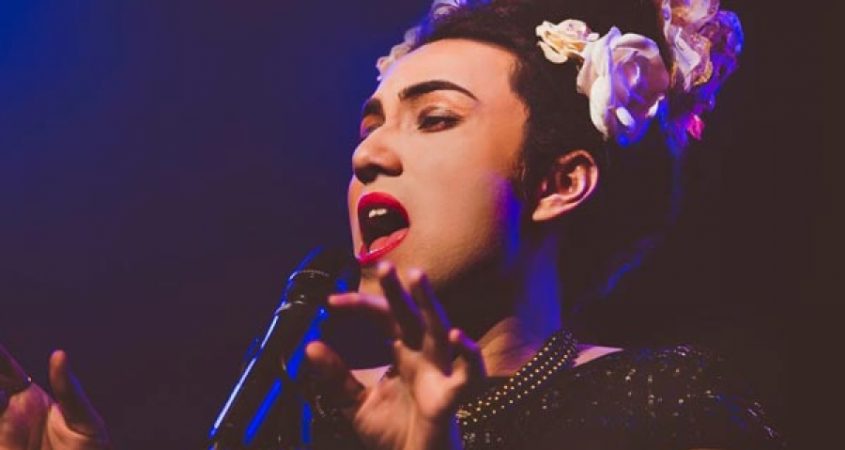 Trans Voices Cabaret is born from an enthusiasm for seeing more trans bodies and voices represented onstage in an authentic and autonomous way. Hosted and headlined by jazz singer, cabaret artiste, and gender-transcendent diva Mama Alto, and featuring a set from Canberran singer-songwriter and producer Shoeb Ahmad, audiences can expect a line-up of original performances in a range of genres.

The show includes a cast of ten emerging vocalists from the Canberra performance scene who will astound, soothe, or disquiet audiences. The cast came together through a series of vocal workshops developed by Tuggeranong Arts Centre (TAC) mentee Florin Douglas. The workshops, held in October, were designed to support the performers to feel confident in their voices and performing abilities.

Douglas is a local singer and performer who went through rigorous vocal and singing training as a teenager, but when he transitioned medically, was left with little understanding of how to wield his own speaking voice, let-alone sing.

“For trans and gender diverse populations, the voice is an integral but oft-overlooked expression of the self,” Douglas says. “Many trans, non-binary, and gender diverse folk have a relationship with their voice that is reminiscent of a tired truce, whether growing to love it, not liking the sound of it, or because of fears that their voice will ‘give them away’ as trans.

“Sounds and voices are intimately connected to gender and expression, and the trans and gender diverse community long for more information about their voices.

“Being a singer, or a performer of any kind, while also existing as a trans or gender diverse person can be uncomfortable, volatile, and scary,” he continues. “With the segment of the cabaret that is dedicated to emerging local singers, the event will make a space for talented performers to be respected both for their art and for their lived experience. In putting together Trans Voices Cabaret, the objective has been to honour and explore gender diverse performance communities in creative and non-medicalised ways.”

Trans Voices Cabaret will be hosted by jazz singer Mama Alto – a transgender & queer person of colour who works with the radical potential of storytelling, strength in softness, and power in vulnerability.

Also performing will be local singer/songwriter Shoeb Ahmad, who offers a rich and extensive background in Australian music, creating idiosyncratic music over the last decade.

Among the ten local performers on the bill are InkBits and Electra Powerhouse.

InkBits is Canberra’s very own Queen of Punk Cabaret. Known both locally and nationally for performing their gender fluid covers with a twist, this artist melts modern music with Brecht undertones to deliver a captivating show that packs a punch.

Electra Powerhouse is a nonbinary performance artist and an aspiring DJ. Electra is inspired by a wide range of genres from experimental electronic music to jazz, blues, and contemporary. In their teens, they trained in classical singing with aspirations to join the Opera someday. Nowadays, Electra performs sensual jazz and blues with the goal of integrating their performance art with music.

This powerful celebration of transgender and gender diverse performers is the final event in TAC’s month-long TuggersPRIDE program, which brings together some of the best and brightest LGBTIQA+ artists in Australia in a specially curated series of events, performances, and discussions.

Trans Voices Cabaret is on at Tuggeranong Arts Centre on Friday, 6 December at 7.30pm. The event is free but bookings are essential. Bookings: trybooking.com/BFYKD