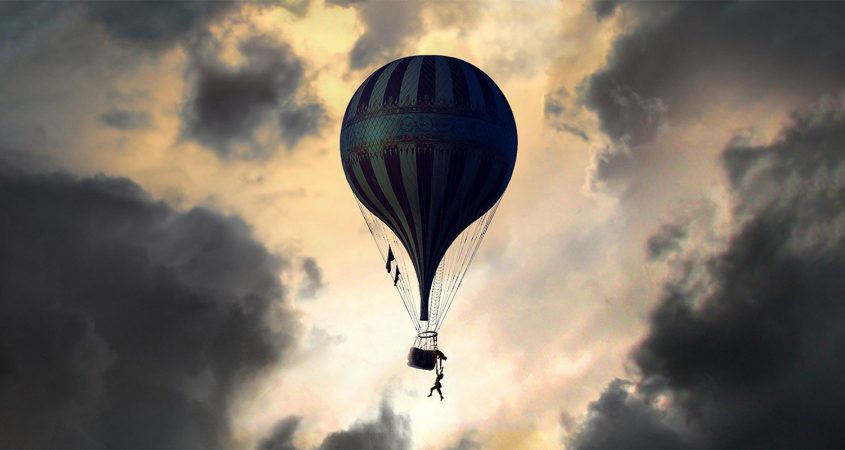 Inspired, it seems, by the scientific adventures of the real-life James Glaisher and an avid balloonist named Henry Tracey Coxwell, The Aeronauts portrays the life-threatening difficulties that Glaisher and Coxwell narrowly overcame in the course of two record-breaking ascents, substituting the showy character of balloon pilot Amelia Wren for Coxwell.  In the course of the filmic journey, Glaisher and Wren encounter many of the phenomena that the real Glaisher and Coxwell did in a journey of less than two hours, ranging from objective gauges of temperature, pressure, and time to the effects on the mind and body of hypoxia and hypothermia; but their journey incorporates as well events from the lives of French balloonists Jean-Pierre and Sophie Blanchard.

Eddie Redmayne and Felicity Jones, who played opposite each other as Stephen and Jane Hawking in The Theory of Everything, team up again in this part historical drama, part scientific adventure about two characters with very different motivations for taking to the air: Glaisher (Redmayne), for the study of the characteristics of high-altitude air in order that weather prediction become a possibility; Wren (Jones), when she can finally bring herself to do it, to make amends for the past and break a world record for ascent by balloon.  The chemistry between the two, prickily smart when he first contrives to meet her, develops without obvious predictability, and if some of the phenomena are predictable, it is so only because of the efforts of such pioneers as Glaisher and Coxwell to uncover them.

The film builds tension nicely, maintains a good pace, and only once that I’m aware of introduces an event that seems too unlikely; making us feel a part of this pioneering journey of discovery, it’s generally believable and actually a good deal of fun; and we may even, in the process of enjoying ourselves, unwittingly learn a little meteorology.  Engaging, insightful, and by and large historically authentic, this is a movie to give us a different perspective on the world and how we have come to our understanding of it.