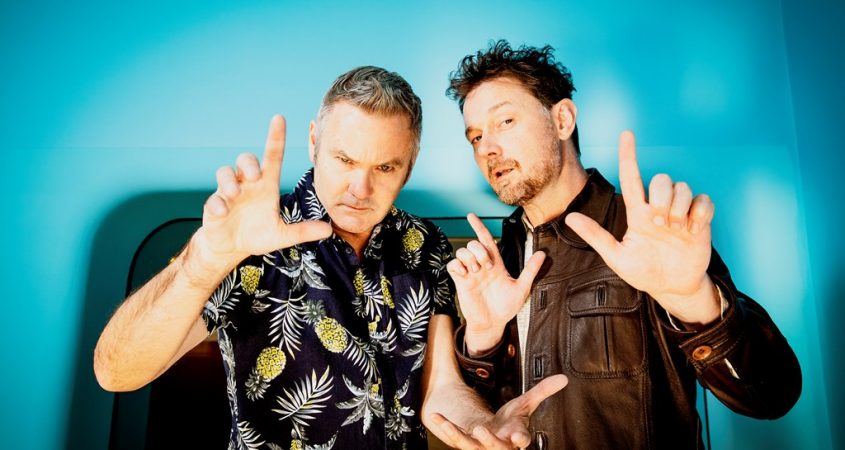 It’s Wednesday lunchtime, and I’ve caught him between checking into a hotel and the notorious challenge of finding somewhere to goddamn eat in Parramatta.

“I’m the gormless idiot. The himbo! Love that stuff. But in this show, it’s far more free-wheeling and chaotic. If you can imagine Paul McDermott on stage anyway, he’s like herding cats. But his brain is—every personality he has is a different cat. And I’m really enjoying just being the voice of reason. I enjoy the different dynamics we’ve got going.”

“We’ve got this show about two mates. Two middle-aged, middle-class mates who sing songs about that. It just sorta came out of nowhere,” says Gatesy. “We’ve been singing together a long time and talking about it, but actually making it happen was a-whole-nother interesting thing.”

Paul and Gatesy came together with the song Stone Crows, written in memorial of a mutual friend. From there they wrote in private for years until circumstances conspired to get them on stage.

“It was through a friend, Fiona Scott-Norman, who was programming the Ballarat Cabaret Festival. I had lunch with her and I mentioned it to her, and she goes, ‘I want that show in my festival; you’ve got six months.’

“Six months! That was the perfect kick up the arse that we needed to get it together. And although the show was a collection of pretty songs with silly banter in between, now it’s become a proper full-bloated comedy show with beautiful little excursions off to this side, which is what Paul really enjoys anyway.

“I also like subverting those expectations,” Gatesy continues, “that people think it’s a serious song when really it’s not, and vice versa. Which is really fun to do with Paul because he’s so dang sincere when he sings; especially the pretty songs. They’re perfect. They’re beautiful.”

Gatesy even sounds a little in love as he talks about them.

“But because we rehearse on Skype… we can’t rehearse everything down to the T.”

Collaboration has clearly been a challenge, but one that Gatesy enjoys, and after 23 years of collaboration in Tripod, it’s one he’s experienced with.

“I figure that anyone who’s been doing something for a long time, especially in a group, you’re equipped with the right set of skills to negotiate collaboration and all that. But of course, the way Tripod work and the way DAAS work, it’s completely different. With Tripod it’s very much we wait ‘til we get into the room together to write. That’s how the stuff that we come up with together will always be better than just one person bringing that song in.

“The problem with the material you write by yourself, you’re not surprised by it, because you know it and you thought of it.  But what’s beautiful about collaboration is to take that idea and, even if they misunderstand what your intention was—which is often the case in Tripod. So much. So often—in that misunderstanding was a funnier idea than the original one.”

Misunderstanding? You’d think Tripod, a band that’s been around since the mid-’90s, has communication in the bag.

“Sure, but we would make the mistake of predicting what the other person thinks: ‘I reckon I’ll pitch it this way because ____ will really like that.’

“But no, no, it just doesn’t work that way. It’s almost meta too: ‘I’ve got this idea that you’re gonna hate.’

“Then the other person: ‘Oh will I hate it, will I? Oh, you know me so well. Okay, give us it, give us it.  Ohhhhhh no, I actually love that idea.’

“Passive aggression. It’s all that kind of mixed up stuff. But it’s also important, that thing of leaving it in the clubhouse, you know? Like Paul, Yon, and Scott know me better than anyone because they’ve seen me at my most vulnerable and my most anxious and that sort of stuff.”

Tripod must be pretty comfortable with each other, because the band are in earshot while Gatesy’s telling me this. He breaks off occasionally to read out signs and make suggestions while they search for a food court (“Fresh food markets… there’s an information thing around the corner there”).

“The flaws, or even the strengths of a particular person, they bring out different aspects in you. And rightly or wrongly you could say that someone who is very difficult to work with brings out something in you that’s so much better than if you were ‘Yes, and-ing’ each other, d’you know what I mean?

“Creating something out of nothing is a brutal and violent exercise. There’s a lot of heartache, usually.”

So how does this exercise break down when Gatesy’s working with prolific ideas man Paul McDermott?

“We’re looking at about 100 starting points and ideas,” he says. “Paul’s a generator; instead of working on a song that’s half-finished, he’s already started writing another one. So my job is to bring it all together and synthesise all the various ideas and turn them into songs. And he’s very generous with that ‘cause he just wants to finish and start writing another one.

“We’re interested in complementary things. Sometimes we have a starting point and it goes completely in an opposite direction. But we’ve still got the original songs, and that’s kinda hard to let go of.

“That’s where the mileage and wisdom of the collaboration comes in. Of just acknowledging that where we got to is better than the original idea… we can fuckin’ lose the original idea, you know?

“With Tripod it’s very much a democracy; there’s three of us, so it’s easy to make that decision. You’re outnumbered. But when there’s a duo and you’re locking horns or disagreeing then it’s basically a battle of attrition. And I hate that. I hate that. I hate just going,  ‘Well, I think it’s funny… well,  so do we keep it then… uh, yes… wellll… but the audience… y’know… how do we…’

“It’s just harder to navigate. But it’s that other person’s perspective or the other’s brains that turn in it into something more universal or bigger than I ever expected. And coming to terms with that is really important to recognise.”

Given the challenges of writing together over Skype, from different cities, is there any writing that happens on the road?

“Nah. You try to but more often than not it’s just too tiring. You gotta enjoy the travelling part. Ferris Bueller it; stop and look around once in a while. And then, when you get back home, you’re rejuvenated and you want to work on new stuff. But you can’t do it all at once. It’s insane.

“Paul would probably like to ‘cause, again, he likes to just keep creating and wants to film and all that sort of stuff. But I’m more of a Mars Bar—a work, rest, and play guy, you know? I know when to clock off each time.

“Tripod learnt pretty early on; we thought we could keep working as we toured, but no; that was never how the good stuff came.”

Gatesy’s taken away many lessons from his years in the bis, but he’s firmly against the idea that anyone can tell you how to do it.

“We’ve explored all manner of different genres of music comedy. You know the ‘ga-digga-ding-digga-ding,’ the ‘I say, I say, my wife—’ etcetera, like keeping the music really simple so the jokes land. But that’s not what we wanna do. We want the songs to stand up on their own. And if you’re laughing, then that’s even better.

“Timing is everything; hitting the joke at the right time. We’ve kind of learnt the timing of music comedy stuff over time.

“But that idea of the Rules of Comedy. Anyone telling you the five rules of comedy or whatever or—anyone! Anyone telling you how to do anything! How to write a song, how to do stand-up comedy. Nah! Show business in 2019, you just gotta keep doing different things, and everything seems like a side hustle when really it’s all one big hustle. And that is show business.”

Paul and Gatesy Go Solo is showing at The Playhouse on Thursday, 5 December at 8pm. Tix are $59 + bf and are available from canberratheatrecentre.com.au