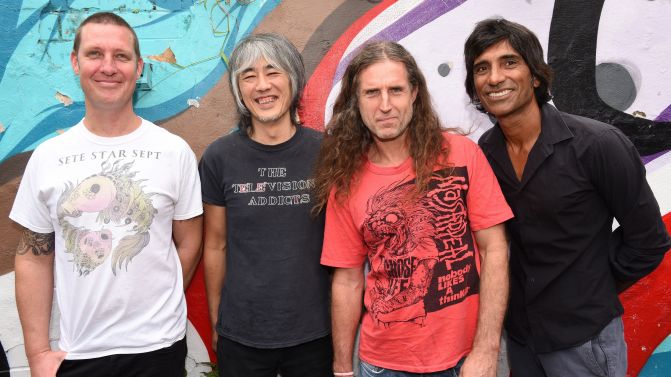 The Hard-ons album number 12 – not counting the live albums, the EPs, and the rest of a discography that’s deeper than the Marianas Trench – has arrived. But before the review, a bit of a rant.

Frankly, should the ARIAs or any other organised musical body in this country ever decide to honour musicians before they die, or have some other cultural driver like a documentary or someone from overseas trigger acknowledgment, THIS is the band.

I mean, guitarist Peter ‘Blackie’ Black alone should have gotten something for putting out a song every day in 2017, but whatever.

These guys have too much integrity and would probably tell the ARIAs to fuck off; in fact, I know this to be true because that’s exactly what Blackie told me they’d tell them when I bought up something along these lines a few years ago.

Anyway, it was 1983 – that’s nearly 40 years ago – that three ethnically diverse Punchbowl punks set off on a musical life with a potency that eventually made Turbonegro nervous fanboys when they supported them in 2003. Nervous to the point the guys thought Turbonegro were rude, until they played with them again in Europe and the Norwegian deathpunks bought a pile of Hard-ons records for them to sign.

Flash to 2019, and So I Could Have Them Destroyed is an absolutely superb LP that builds on the band’s fearless exploration of a wide array of musical influences, and succeeds at this both in individual song writing and the album as a whole.

From the metal influenced harmonies of the opener into a breakneck verse chorus on Made To Love You II, into tough punk riffing on Bad Temper To Match, and then to the almost Beach Boys influenced power pop of Better By The Hour. That’s in the first three songs of the 12 tracks for your perusal on this outing.

These elements have been displayed on previous records, namely the Most People… albums , Alfalfa Males Once Summer Is Done and Peel Me Like An Egg. But The Hard-ons as a four-piece in 2019 is in a particularly fertile place.

Blackie’s solo work since he started doing solo acoustic shows has influenced his writing. Not Just For A Day is a good example of this, where the solid acoustic underpins the song and gives yet another dynamic option for the band to explore.

Midnight and This Is How We Roll have killer single note guitar lines that change the mood and further the layers of the album, and the rhythm section of Ray Ahn and Murray Ruse is just superb. The former’s spooky delay guitar line and the latter with a great chord progression on the chorus, combined with a Beatles-come-Beach Boys vocal refrain at the end, will stick in the head long after the track is done.

There’s plenty of flat out bangers too. Do The Bunk, Oh…You’re Crushed, and A Whole Lot of Tooth all pound heads. Instead of being incongruous, they meld together across a well curated song list that keeps the album fresh throughout.

I’m pretty much convinced that the band can go until 2053 without turning out a bad album, and on the evidence presented on So I Could Have You Destroyed there’s no reason that the material won’t continue to grow and refine. All four members should be chuffed, playing vitally well and writing superbly.