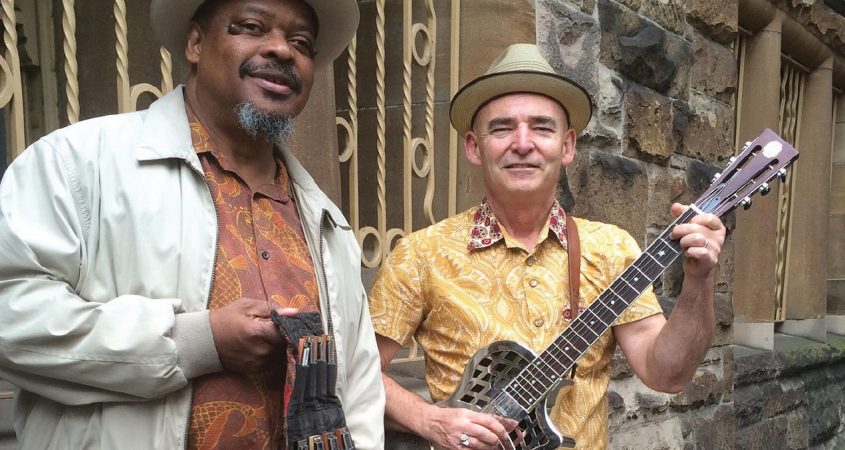 Experience Piedmont, Delta and Hill Country blues along with soulful renditions of blues classics from this highly experienced and critically acclaimed duo—with individual performance and recording bios spanning 35 years—and blues harmonica that transcends stylistic boundaries when they hit Canberra on Thursday the 19th of September.

Phil Wiggins and Dom Turner first met in the ‘80s when Wiggins was touring with his long-term musical partner, John Cephas, as part of the blues duo Cephas & Wiggins. Back then, Turner was the part of many Australian tours as support act with his group Backsliders and it was from those tours that he became great friends with Cephas & Wiggins.

“It was such a great honour to work with tradition-bearing blues musicians and I have fabulous memories of the times we spent together on those tours,” Turner says.

John Cephas sadly passed away in 2009, a great shock to the traditional blues community and an enormous loss to the music world. In 2014, to honor his contribution to music and the trio’s friendship, Turner went to the US to perform a series of East Coast gigs with Phil. This critically acclaimed tour marked the beginning of Wiggins/Turner duo.

However, this is the first Australian tour the duo has done for a few years. They have both been busy with other musical projects—Dom with Backsliders and The Turner Brown Band, and Phil with The Chesapeake Sheiks and various other musical collaborations.

“Not only has Phil been busy co-writing a book Sweet Bitter Blues (due for release in March 2020), but he recently received a United States National Heritage Fellowship Award from the National Endowment for the Arts—that’s all aside from the fact that we both live in different countries,” Turner exclaims.

Australia has a long history of appreciation and understanding of blues music evident in the number of blues related music acts as well as venues and festivals throughout Australia. In fact, in Clarksdale, Mississippi, in the heart of the Mississippi delta, the Australian flag flies due to the great number of Australian visitors.

But unlike Wiggins, who is a tradition bearer—a musician who was immersed in blues music and learnt first-hand from being around traditional blues masters—Turner, as an Australian, is a musician approaching acoustic blues from outside the tradition; having learnt primarily from listening to records.

“We draw on songs from the early 20th Century, but we present them in our own way and in our own voice. For us it is about the feel of the music, and what’s exciting for me and Phil is how we have a real connection in the way we meld our sounds. It feels natural and I feel like it pushes us both musically,” Turner says.

Tickets are on sale now for their show at Tuggeranong Arts Centre on Thursday, 19 September. The ticket price of $35 includes pre-show entertainment by the Leisa Keen trio in the Art Centre’s lakeside venue. Tickets can be purchased online via Trybooking at https://www.trybooking.com/BCCSV