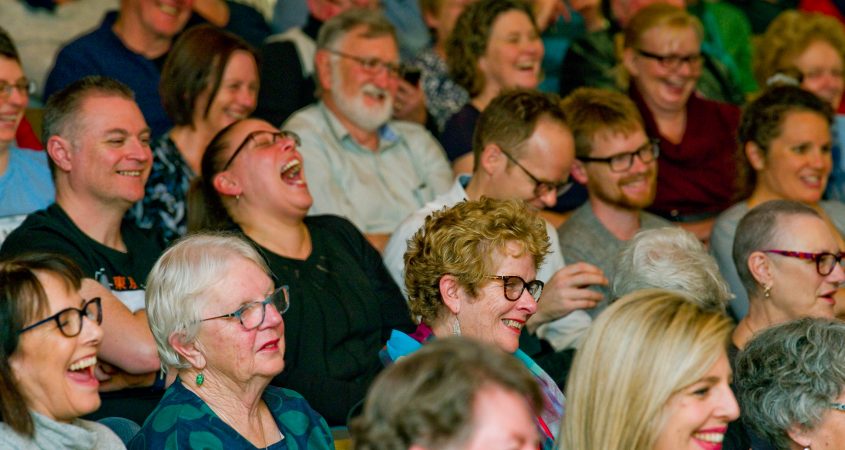 A writers’ festival holds much promise: to engage through new ideas, to challenge by diverse attitudes, to inspire with those at the forefront of matters that are relevant to all, to encourage writing aspirations, and to entertain via the twists and turns and quirks that emerge in conversational settings between hosts and guests.

The sessions that drew my attention were these.

Post-traumatic stress disorder (PTSD) is increasingly in the public consciousness, thanks in large part to those living with it bravely giving voice to their stories. One such is Commander Grant Edwards, who spoke of his journey with PTSD with Dr Norman Swan, the host of ABC Radio’s Health Report. In this conversation, Commander Edwards — former elite athlete, Olympics qualifier, Australian Federal Police (AFP) Commander, and Australia’s strongest man — discussed his life: early life traumas; a distinguished athletics career; his time in the AFP serving in several high-stress overseas postings; his marriage, and fatherhood; and a diagnosis of PTSD, an outcome of the cumulative trauma of a lifetime.

Commander Edwards spoke courageously and straightforwardly, never shying away from hard questions, and Dr Swan, adept as always, guided the conversation thoughtfully, passing from one challengingly complex subject to the next with finesse. The conversation offered a valuable insight into a life whose highlight reel would be easy to envy but whose reality few would want.

Commander Edwards’ book, The Strong Man, detailing much of his life so far, will undoubtedly appeal to anyone interested in biography in general, in an individual’s experience of PTSD, or in garnering a particular insight into life in the AFP.

Simon Winchester OBE, a prolific British–American author and journalist with a long list of successful non-fiction works to his credit, spoke with leading conversationalist Richard Fidler. In the lead-up to discussing his latest book, Exactly: How Precision Engineers Created the Modern World, Mr Winchester engagingly shared many interesting and amusing anecdotes, beginning with his early life, when his father, a precision engineer, sparked his deep curiosity about how things work by demonstrating the properties of completely flat surfaces.

Mr Winchester went on to speak of various fascinating moments in the history of precision, and the current state of the extraordinary precision that has been achieved, as well as the ongoing drive for ever greater precision. Mr Winchester admires these remarkable achievements, though himself a lover of the beauty of the imprecise, and he asks what we might be losing in our quest for ever greater precision. He did not answer that question in his conversation, instead leaving the curious keen to buy his book.

Canberra Times journalist Sally Pryor moderated a delightful discussion with Virginia Duigan (The Age of Discretion); Sophie Green (The Shelly Bay Ladies Swimming Circle); and Nicola Moriarty (The Ex), skilfully drawing out each author’s motives and inspirations for writing her novel; the experiences of each in the publishing journey, especially in respect of titles and cover designs and the role the author may have in these mostly committee-made decisions; their favourite reads and favourite authors, including what they were currently reading; and the joy each finds in the bookclubs of which they are members.

It was a very friendly session, the authors being candid about what they love about writing; their writing challenges; why they have always loved bookclubs and the companionship and insights of fellow book-clubbers; whom they turn to for support and feedback; and how they negotiate their personal lives and relationships when ideas for their works are drawn from the lives of friends and sometimes family.

The audience was very appreciative, and there was so much interest that the session’s end left many hands still in the air.

In this session, journalist and television presenter Emma Alberici posed a range of questions about the nature of a writer’s life to authors Charlotte Wood (The Natural Way of Things), Brian Castro (Blindness and Rage: A Phantasmagoria, a novel told in 34 cantos), and Simon Winchester (Exactly: How Precision Engineers Created the Modern World).

Although each author revealed quite different methods of working and sources of inspiration, all agreed upon privacy as essential to writing success; that long periods of doubt-filled space are necessary; and that getting it right takes experience, particularly in respect of the technical aspects of writing, such as structure, pace, and rhythm.

They also held views in common on the writing process, including the view that writing is very hard and sometimes boring and laborious. It takes commitment and discipline to get from original idea and inspiration to final product, and, although each of them has his or her own path there, the journey is, they agreed, daunting, especially with strict publishing deadlines.

All three authors also agreed that the worst impediments to the writing process are interruption and noise, as they cause the writer to lose the thread of thought and inhibit the flow of imagination: quietness and solitude are musts.

With respect to ideas for books, there was no single answer. Sometimes the idea arises from a landscape; at other times it can be at the urging of another person; and sometimes it can arise from observation of an aspect of the human condition.

Each author said that starting a new book, no matter how well-conceived the idea or how thoroughly researched, is intimidating, and that having published books before doesn’t necessarily prepare you for the task ahead: “You only know how to write the book you’re writing”.

No Friend But the Mountains
Behrooz Boochani and Omid Tofighian, moderated by Anna Vidot

Behrooz Boochani is a Kurdish–Iranian journalist and refugee who was detained on Manus Island from 2013 until his very recent transfer to a detention facility in Port Moresby.

Mr Boochani attended the booked-out session via video link from his place of detention, and Mr Tofighian attended in person. The session was moderated compassionately and insightfully by ABC Radio Canberra journalist Anna Vidot, who focused on the challenges involved in writing the book. With amazing fortitude in the face of years of difficulties and privations, Mr Boochani wrote his memoir, No Friend But the Mountains, mostly during the night so that he could write undisturbed, laboriously texting his words in Farsi to his translator in Australia, Omid Tofighian.

Mr Tofighian’s minimisation of his own role in the book clearly expressed an admirable modesty, and the audience, deeply engaged, gave author and translator a long standing ovation. No Friend But the Mountains is the winner of the 2019 NSW Premier’s Award, the Victorian Premier’s Prize for Non-Fiction, and the Victorian Prize for Literature.

As to the festival’s many-faceted promise: if the range of insightful audience questions and the audience response are anything to go by, then the 2019 Canberra Writers’ Festival delivered extremely well on it.