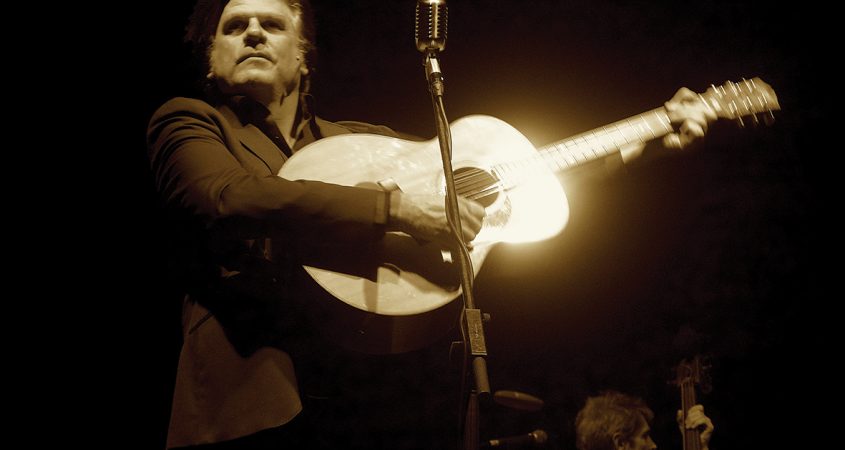 BMA’s Andrew Myers catches up with the man to talk cold, hard, dirty Cash, and the 10th anniversary tour of The Man in Black.

Tex Perkins has been the face of many, many bands over the last 30-plus years – namely the iterations of The Beasts of Bourbon, the thumping rock band The Cruel Sea, not to mention a successful solo career under his belt. And he was also a regular on SBS’s beloved music trivia show RocKwiz.

What I’m trying to get at is, Perkins has done the rounds of the Australian music scene more times than you’ve had hot dinners. But now Tex and his band The Tennesse Four are setting sights to return to our frosty territory for a tour that’s draped in black…

I had the pleasure of having a chat with the sarcastic and baritone boy on the eve of his ten year anniversary tour of The Man In Black – The Songs & Story of Johnny Cash, shuffling through Sydney, Melbourne, Hobart, Adelaide, Perth, Brisbane and, of course, our dear Canberra.

His nickname “Tex” (Gregory on his birth certificate) came to life while he was in his band The Dum Dums where Perkins found himself in a line-up with two other Gregs. So the stage name of Tex Perkins came to life and it’s stuck ever since. But as he insisted, some people do break the mould from time to time and think outside of the box… calling him simply “Perko.”

Perkins told me where this idea for a Johnny Cash tribute show came from all those years ago.

“I was invited by a bunch of producers who approached me for the tour… and I don’t think they realised, but I was very familiar with Johnny Cash’s music. It was a good fit and it worked right from the start. I just can’t help but celebrate the ten year anniversary.”

If you have never witnessed the way that Perkins weaves dialogue in between the songs so naturally, with only the acoustic guitar slung around his chest like a rifle, he tells a story before breaking into the next Cash hit.

“It’s about the story of Cash’s life, the story of his career, the love story between him and June Carter, from birth to death, but also the contradictions and the duality of his character. On one hand he was conservative, a family man, but also he was radical and had an outlaw perspective.”

Tex is a natural and you can tell Perkins wants nothing more than to honour the legacy that Cash has left behind.

“The songs have a strong narrative, but we also play those that reflect my attitude and how I connect with Johnny Cash, usually through a kind of dark humour.”

As Johnny Cash had over 90 albums recorded, the idea of curating a setlist can be daunting for even the most seasoned and well-versed fans. But Perkins spoke of it as if it were as easy as writing a shopping list.

“There’s a bunch of Johnny Cash songs you have to play, the gospel songs, the songs that deal with death and outlaws… all this grubby but fun stuff.” He lets out a gravelly chuckle, before stating: “You gotta have the big hits!”

From one fan to another, I had to ask Tex about his first introduction to the music of Johnny Cash. Tex’s voice lit up.

“A Boy Named Sue was a hit on the radio when I was maybe six… I remember it was probably the first song I ever heard that described this shady side of life – the guns and the blood and the beer and the mud. That song showed me an intriguing world I knew nothing about.”

Before I could even respond, he added: “What pricked my ears was the song had something bleeped out, something censored. It made my mind boggle and it made me think of things far worse than what was being sung about.”

The impression of that one song has lasted almost 50 years and morphed into a career defining tour that not only is regularly sold out but also won the Helpmann Award for Best Contemporary Australian Concert.

I close by asking: what did he want the audience to take away from this monumental tour? With a cheeky chuckle Tex replied: “Merchandise.”