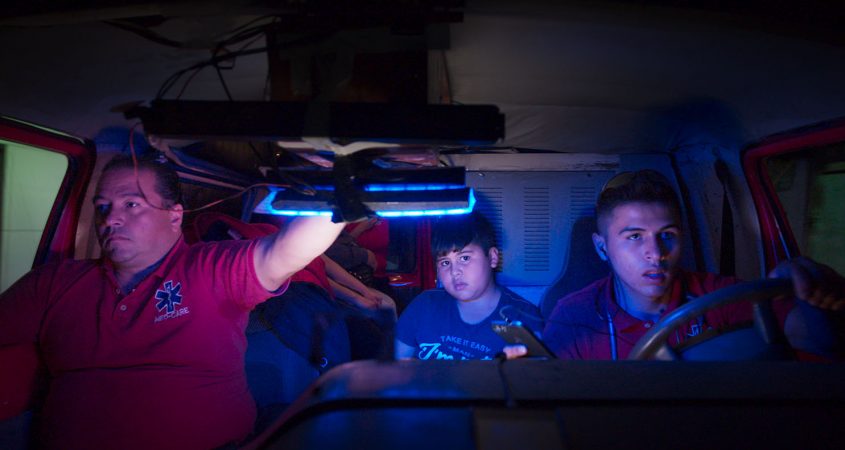 Mexico City’s population of 9 million has access to fewer than 45 publicly funded ambulances, and the consequent shortfall is filled by an unknown number of privately run ambulances.

Seventeen-year-old Juan Ochoa is the main driver of one such ambulance and of the family ambulance business, and he is conscientious about making it work. He also cares for his patients; but hindering delivery of the best service is an enervating combination of official corruption — police extortion, bribes, and kickbacks — and powerlessness to obtain payment from patients unwilling to pay. This has led ambulance services such as the Ochoas’ to make kickback deals with private hospitals to deliver patients to them who might more naturally have gone to a public hospital. In this way, the private ambulance services, which in addition compete frantically with one another to arrive first at an incident, find themselves making choices that are ethically questionable — sometimes with grave consequences.

Midnight Family portrays the night-to-night reality of Juan’s family — including his father, an elder brother, and a younger brother whose school attendance is at best patchy — with great immediacy, offering an insight into the marginality both of the business and the difficulties of their nominally private lives’ makeshift mealtimes and even sleeping arrangements. Filmmaker Luke Lorentzen spent some 90 nights in a three-year period in the Ochoas’ ambulance with them until he’d found the thread running through the many emergencies they dealt with in that period, and (with permission from everybody concerned) has succeeded in subtly sequencing them to gently expose, as the documentary progresses, the thread of tension between their humanity and the necessities of survival.