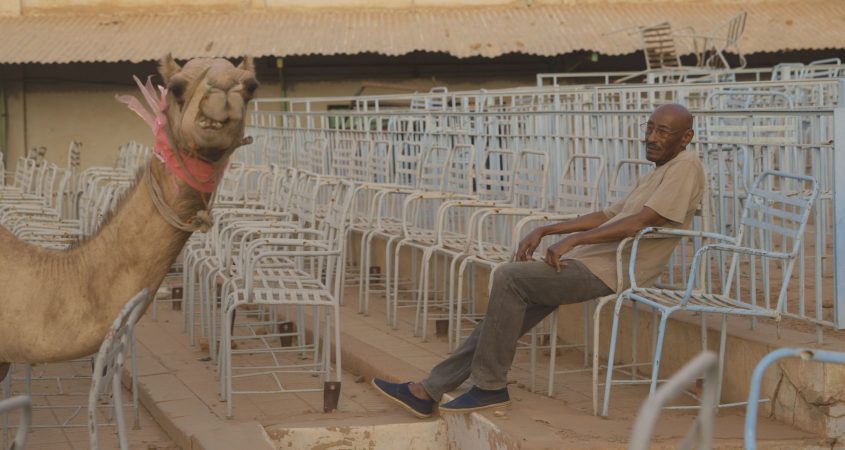 Four friends who decades earlier were film directors join together on a project in the hope of reviving cinematic tradition in the beleaguered landscape of Sudanese cinema. They have lived through several alternations of dictatorships and democracies, and currently live under a dictatorship that has decimated the Sudanese film industry.

Understanding the importance of story-telling, and the power of cinema to reach hearts and minds, the friends set out with an ancient projector and equally ancient films to bring film back to one small community after another. Seeking their first venue, they come across the long-abandoned, decaying outdoor Revolution Theatre and envisage the potential of a single screening of a film there.

But organisers of any public assembly require government permission; and, as they discover, the bureaucratic process of obtaining it takes skill, courage, and considerable patience. While they wait, they clean the cinema, ready for the big event.

During time out from working on the cinema, they share their memories of the past and of their youthful aspirations, and pay each other and themselves recognition for what they did achieve, albeit long ago, without letting either nostalgia or despair cripple them.

In the manner of its protagonists, Talking About Trees takes a quiet, slow exploration of patience and acceptance.  What are most compelling about this film are the men’s faces and the lives writ large upon them: their delightfully good-humoured acceptance of life’s vicissitudes, and their perseverance in spite of its vagaries, flowing as they do with its rhythms, without artifice, without regimentation, and without the least bitterness.