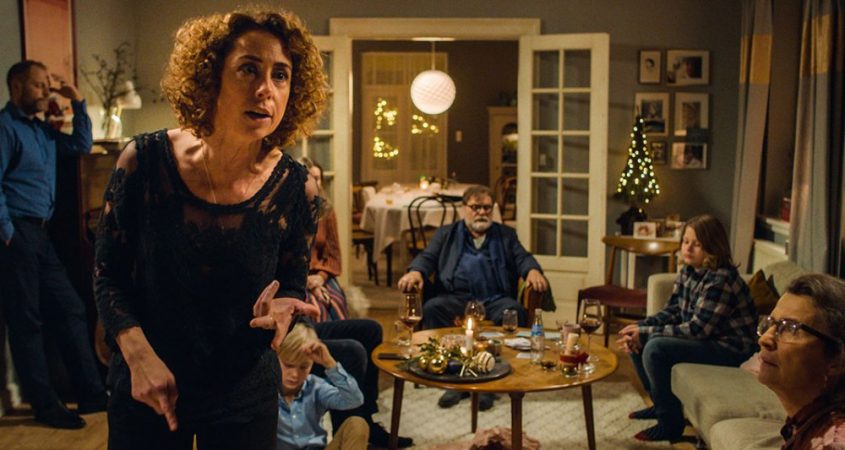 We generally suppose Christmas to be a time of celebrating and demonstrating our love for one another through time-honoured traditions. In reality, for many it’s a time of immense and unwanted pressure as they once again try to keep the ship afloat while running the gamut of difficult family relationships.

Katrine (Paprika Steen, who also directs the film) and her husband, Mads (Jacob Lohmann), are once again expected to host Christmas for their families. The morning of Christmas Eve sees Mads making an early start on the cooking and Katrine trying to ensure that everything in the house is ready while she manages the non-stop calls from demanding family members.

Amongst those who are going to make the day difficult are Katrine’s divorced parents, her priestess sister with her pretentious husband, and their spoilt son.

Eventually, everyone having arrived, festivities begin in fits and starts with the usual smalltalk and eating and drinking, all marital and other difficulties carefully hidden. But, with sufficient barbs and snipes, the long-held angers and resentments bubbling away under the surface begin to seep through the veneer of politeness and bonhomie. And when the black sheep of the family makes an unexpected appearance, the veneer cracks wide open to reveal some uncomfortable truths.

That Time of Year is billed as a comedy, but any comedic scenes must have ended on the cutting-room floor. Of the several adjectives that might aptly describe the film, “humorous” isn’t one. There are moments of kindness, courtesy, compassion, and even sweetness, but it is hypocrisy, greed, intolerance, and spitefulness that are more powerful, and it is their expression that ends up changing the family forever.

The acting is convincing, and relationships are so believable that viewers could expect that they need only knock on the door of Katrina and Mads’s home to find themselves in the midst of a real family Christmas. So, even though it isn’t a new story, and one or two parts are not quite credible, That Time of Year brings to life the complexities of a disparate family’s annual Christmas gathering engagingly and energetically.