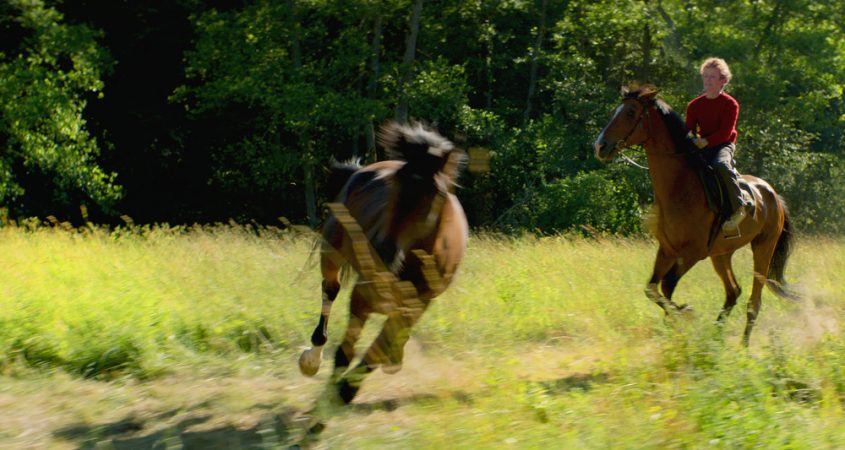 It’s 1999, three years after the death of his wife, when Trond Sander (Stellan Skarsgård) moves from Sweden, where he’s spent most of his life, to live a solitary existence in a remote part of his homeland, Norway.

Trond has been in his cottage for a few months, and the snow is thick on the ground when he is woken one night by a man out calling to his dog. Trond goes out and meets the man, who turns out to be his neighbour, Lars Haug (Bjørn Floberg). Trond recognises Lars, who was ten years old when they last met, and the meeting triggers Trond’s memories of the unforgettable summer he spent in the Norwegian wilderness with his father (Tobias Santelmann) in 1948, when Trond was fifteen. The repercussions of the events, tragedies, and discoveries of that summer were such that they have governed all of Trond’s life.

Out Stealing Horses is a gripping study of the unpredictable; of tragedy, betrayal, the loss of innocence, and the redefinition of youthful ideals; and of how such redefinition determines entire lives.

The film is set in breathtaking landscapes: the summer’s magnificent, verdant, life-filled woodlands and rivers of Trond’s youth alternating with the snow-laden winter surrounding him as he journeys back in memory to that pivotal summer with his father.

Poignantly self-narrated by Skarsgård, whose portrayal of the older Trond is quiet and mesmerising, the film makes no false moves, switching naturally between the world of 1999 and that of 1948, when the experience and scars of war remain fresh in the men and women who fought the horror of the Nazis.

Beautiful in every way, this film has much to offer, including its compelling demonstration of the difference between Trond and his father. This difference is due to much more than age. Trond’s father’s character was forged through his role in the Resistance. The fifteen-year-old Trond, although his childhood included the war, is filled with youthful naïvety and hero worship. The loss of these is a bitter pill, for which Trond’s father tries to prepare his son, telling him: “We decide for ourselves what will hurt”.

Although it is, in some ways, not for the faint-hearted, Out Stealing Horses is a beautifully woven tale, one that viewers with considerable life experience are likely to deeply relate to.