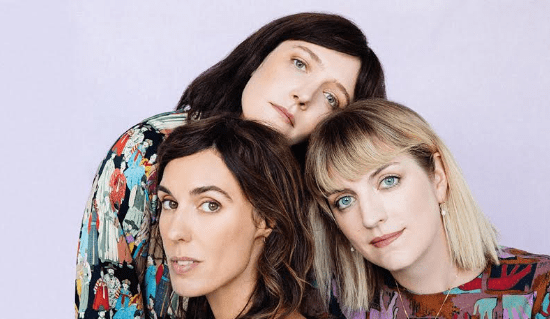 It’s been some eight years since Seeker Lover Keeper’s debut album, and much has happened in the interim.

The indie-folk supergroup, comprised of Sarah Blasko, Sally Seltmann and Holly Throsby has been releasing solo albums, having families, relocating to varying degrees, writing songs with others, producing albums for others, gone on other national tours or some combination of all that and more.

“We have been busy,” the ever-delightful Holly agreed, herself having a daughter with her wife, writing and touring two novels, taking another solo album of hers on the road, and leaving the big smoke of Sydney for a quieter life on the south coast.

With all this change and growth, it makes sense their album making process would have evolved as well. For their first self-titled album they each brought four songs they’d written to the proverbial table and worked on arrangements and vocal harmonies from there. But for their upcoming album, Wild Seeds, the process was collaborative from the get-go.

“Someone might bring in an idea for a song, like chord progressions and a melody for a verse and we’d go from there – but all the lyric writing and song structure was done together.

“Other times we’d decide what we wanted to write a song about and then break it down to the way all three of us would look at that thing, using our own personal experience, and that made the song more universal”.

The trio also had total control over this album by funding it themselves, something Holly happily described as ‘emboldening’.

“It is a great privilege to be able to do that (self fund a record), but it also came down to a practical choice. We didn’t have any contractual obligations to anyone, and we wanted to do it on our own terms and in our own time. We didn’t have to think about management or when it’d come out – we just made the record we wanted to make without any of that stuff.”

A key focus of Wild Seeds was pairing back the overdubs and number of instruments used to create a live-sounding album and one that was replicable on stage.

“Sarah was largely responsible for that”, Holly said of keeping the group on task.

“She had just come out of producing a record for Sydney artist Jack Colwell, so she had her head in producer mode which really benefited us because Sally and I weren’t in that headspace.

“Reducing the overdubs and instruments was actually quite freeing because we knew what we had and having limited choices in a way allows you to be more in the music. Having endless choices can cloud things.”

Two singles have so far been released, along with remarkable videos.

The first track, Let It Out, is a reminder that it’s okay to be who you are and accepting where you’ve come from as a part of that. In the album’s press release Sarah was quoted as saying: “The song became about the fact that, while it might feel scary, there are safe spaces in this world in which a person can express their true self and feelings.”

The mesmerising video features the iconic Magda Szubanski, who is just captivating in her performance.

“We were so passionate about her performing Let It Out,” Holly recalled.

“That has a lot to do with Magda’s off screen, real personality. None of us knew her, but we had this sense of her. I had also read her book (which is just incredible) and also being personally very heartened by her advocacy during the same-sex marriage plebiscite. Even from afar, I felt quite aligned with her, and I think Sally and Sarah shared that alignment.

“She brought so much of herself to that performance and also a side of herself that I think a lot of people don’t really see. I think that was important to her to show herself in such a different light.”

The track is rich with drama, soaring vocals, and three-part harmonies inspired by the joy and turmoil of youth. Needless to say (but I’ll say it anyway), Yael nailed the performance.

“Again, we’re all huge fans of Yael in both her work and in the kind of integrity she has off-screen. She is someone who is able to speak in a very intelligent and nuanced way in terms of the social and political climate that we live in, and that’s something the three of us really respect and look up to. And again we were all really thrilled when she said yes, and she also brought so much of herself to that performance and put so much into it.”

Their third single has been selected and the video cast, but details are being kept firmly under wraps ahead of the 26 July release. You can expect another powerful woman to accompany another evocative and thought-provoking song.

“I love that rock museum!” she laughed down the phone line. “I have to go every time I’m in Canberra, and to the arboretum in general. I’m very into walking around Canberra, Lake Burley Griffin and stuff – Canberra is such a beautiful place.”