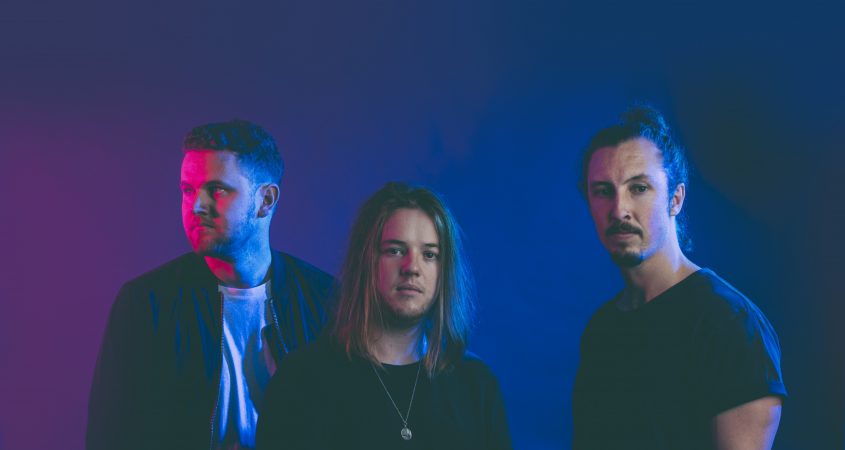 “I was always working out what I could do to not do that. I struggle with routine; I need to be doing different things in different places all the time”.

Well, I guess it’s a good thing life has panned out rather well for the Canberran.

He’s about to embark on another national tour with his two band mates (Harry Sayers and Michael Bell) following the release of their highly anticipated second album, Story’s Start or End (out 9 August, mark it in your calendars folks!)

The much-anticipated album has been two years in the making, borne out of reflection and the maturity that comes with ageing.

“This album came about in our mid-to-late ’20s when you start asking yourself what’s important to you and start having some bigger existential questions about life as a whole,” he explained.

“I think this album really covers that whole journey from the arrogance, complacency, and ego of youth into that more accepting stage of change and growing older.”

Following their ascent to Australian music stardom with their first album, SAFIA took their time with writing and producing Story’s Start or End, with Ben embarking on a soul-searching journey of meditation – and the occasional dash of DMT.

“I think that’s why this album is all about that inner dialogue and letting go of unconscious habits, behaviours, thoughts and processes,” Ben said of his recent dalliance with the spiritual side of things.

“I spent a lot of the record writing alone, so the battle of two halves – with my subconscious habits and what I wanted them to be – comes through in the music. The first half of the album is about this conflict, which then moves towards acceptance and change as the tracks become less introspective.”

While Ben freely admits to dipping his toe into the pool of psychedelics, he confesses he’s taking it slow.

“I’m no where near up to Ayahuasca! I’d have to work up to that. Apparently, it’s like stripping all parts of yourself back to the core.

“But psychedelics definitely have played a role in this record. I’m a big advocate for them, but always in the right setting with the right intent.”

The tour kicks off at the UC Refectory in late August, a fitting start given the group’s long history with the capital.

The three SAFIA members, Ben, Harry (guitar/keyboard) and Michael (drums) all grew up in Canberra, meeting at Radford College.

“We connected over our shared love of music, Guns n Roses really. We were all learning guitar and wanted to be Slash,” Ben laughed.

“Sometimes there wasn’t a lot of opportunity for what we wanted to do,” he said of the private school environment.

“We were very outside of the system and being a private school, it was very focused on classical and jazz. They were the two choices and there wasn’t much room for modern music or rock bands.”

They (obviously) persisted and followed their musical hearts into the world of digital sounds. They started kicking around the Canberra club scene circa 2010, but back then their brand of live and electronic beats and vocals was a fairly new thing.

Yet surprisingly, Canberra was actually the best place to be.

“One of the first support gigs we had was with The Presets when they came to Canberra, and then it was Disclosure and Rudimental. They were all playing at the local spots and we were able to watch, ask them questions and learn heaps really early on.

“We wouldn’t have had that opportunity and experience in a bigger city because there’d be so many other bands that’d get the spot before we did.”

And it has been a bloody stellar run of successes since those early days.

2013 was a big year for the young lads, with breakout track Listen to Soul, Listen to Blues putting them on Australia’s auditory map. A few short years later came debut album Internal with Make Them Wheels Roll and Embracing Me tearing up the charts ahead of a sold out national tour. They have accumulated over 140 million streams, not taking into account their collaborations with Peking Duk and Alison Wonderland.

Despite all of this, with the nation at their feet, all three SAFIAns remain true Canberra locals – Ben living in Dickson, Harry in Hall, and Michael at the back of Belconnen.

“Canberra has such a supportive and incredibly strong music scene,” Ben enthused.

“And from a creative aspect, Canberra writes some of the most interesting stuff. There is a lack of pretence, being removed from Sydney or Melbourne and big music industry, and being a little more isolated fosters people to just be themselves. Some of the most bizarre things I’ve heard are from Canberra bands. And I love it.”

And you’ll love it too when SAFIA hit the UC Refectory with their ‘Stories Start or End’ tour with special guests Boo Seeka & Eilish Gilligan on Saturday, 24 August. Tix are $56.10 and are available by clicking here.