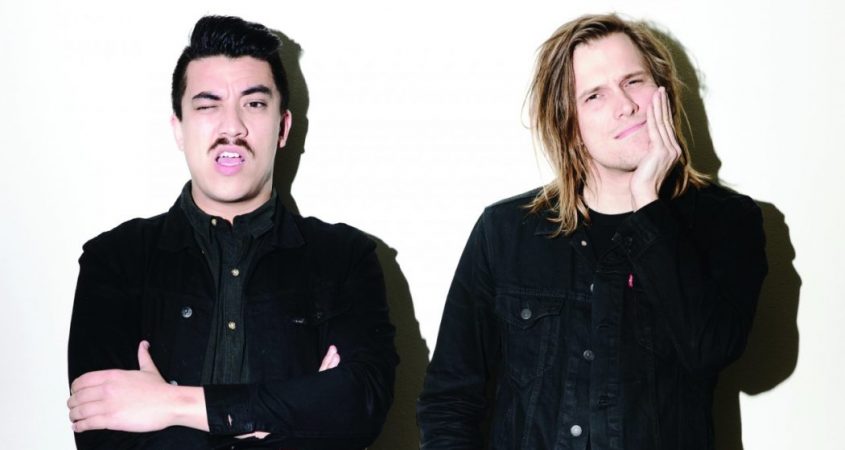 Crude neon cartoon faces were duct taped across the amps and bass drum – indicating the frenzy that awaited us all – Meet me at the Iguana!

Opening act Dulcie greeted us few first punters with their bubbly Perth selves, diving into their lively pop rock. Their cover of Methyl Ethyl’s Ubu was well received, and their original tracks like Fall and Own Ground drew in more of a crowd as time went on.

Approachable Members of Your Local Community shuffled onto the cramped stage with their matching maroon Adidas tee’s and shorts, and dodgy facial hair choices. Only Friend brought the crowd together as they sang along to the lyrics: “You can be my only friend, I don’t want nobody else.” The funky bass and synth of One I Need was reminiscent of Tame Impala, Weezer or Fleetwood Mac. The popular Millennium Queen closed their set.

For having only two members, Polish Club sure make a hell of a lotta noise. Lead singer David Novak swung his black guitar and the duo burst into the impassioned single We Don’t Care – sending the crowd into a frenzy in rhythm to the track’s cowbell.

Their sophomore album Iguana was released just last week but the crowd were shouting back the lyrics as if they’ve lived and breathed the disc for years. Percussionist John-Henry Paja made light work of the primal drumming on back to back hits like Iguana and Goddamn; so much so a cymbal toppled over in the raucous performance!

The rock ‘n roll heavy Beeping gave the crowd another musical upper-cut to get them to their feet for a boogie. A sing-along broke out for the bluesy hit Don’t Fuck Me Over from their self-titled EP. Novak’s smooth as velvet peanut butter vocals stirred something within us all in the crowd.

The Black Keys scented Beat Up delivered some funk. The pounding drum of greed anthem Gimme Money turned the crowd animalistic again. Novak’s brow was a cascade of sweat as he belted out the lyrics: “Take my soul, just gimme, gimme, gimme money!” If this gig was secretly a pyramid scheme, I think everyone in the room was sold.

Iguana’s moody ballad As Low As It Goes slowed down the set, but the moving chorus still kept all of us behind the barrier bellowing.

The short-fast number 2 Scared brought the tone back up to speed as everyone clapped along in time to the beat.

A short and sweet cover of MGMT’s hit song Electric Feel was a nice touch, with the duo cackling like school children at how well received it was.

2017’s Alright Already opening track Where U Been? amped things up to 11 with the punky guitar riff. We barely had time to breathe as they pushed right into the hit single Come Party.

Everybody, and I mean everybody, knew the lyrics to Iguana’s lead single Clarity as we all nodded, swayed, and then jumped into the punchy chorus. The touching single Divided closed the set, with a sneaky encore of the single My House.

Tonight was a night fuelled by denim jackets, sweat and good old fashioned rock ‘n roll. I hope you’ve enjoyed your time at the Iguana.