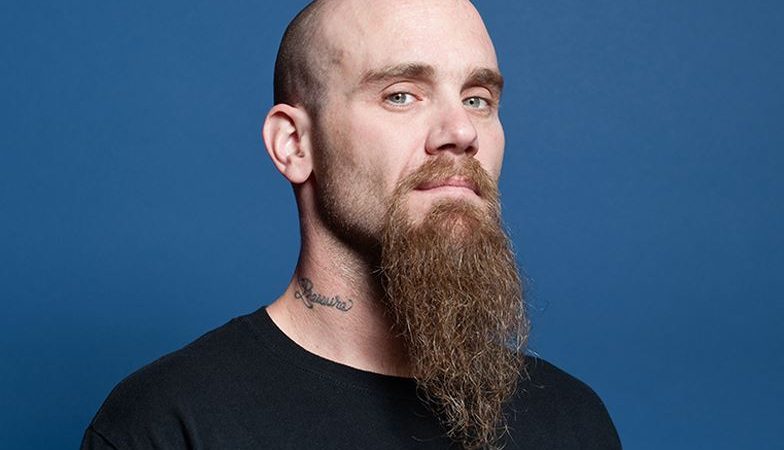 By Pip Gazard and Allan Sko

Kyuss, Queens of The Stone Age, Mondo Generator, solo… Californian multi-instrumentalist, singer-songwriter Nick Oliveri has blazed a decades-long trail across the hardcore, metal, and punk scenes. And now the man is adding an Australia tour, and a return Canberra show, to his bustling itinerary.

Despite his many years smashing the bass and manning the writing desk, Oliveri is not slowing down. Far from it. To whit:

“January/February I started with the Mondo tour with scattered dates in March,” Oliveri states. “Then April 9th I started the Death Acoustic tour – I’m still on the same tour now – did about a month’s worth of dates, made enough dough to fly out my band Mondo Generator to play the Desert Fest in Berlin, then England, and we played some shows in Spain and Italy and Portugal.”

That’s great, Nick, and what e…

“Then I flew home from England to record vocals; I’d been writing lyrics for a band called The Sons of Alpha Centuri – Alfredo Hernandez is on drums from Kyuss and Queens. They’re an instrumental band and wanted some vocals, so I wrote that and we recorded and it sounded pretty good.”

“Then I went home and got my van and my band together and drove out to Detroit immediately because it’s 2200 miles away, to start a tour with Church of Misery from Japan, which is a really great doom band.”

“Did that tour up until last week, when we were in Nashville, and then flew back to Europe to start the tour I’m now on. We’re about a week in. Tonight we’re in Denmark. Scandinavia is really good. They have a really high intelligence. They must have a really good school system, or something. Very smart, very intelligent; know a bunch of different languages. They’re very together, and I love to come play here. I’ll play anywhere that people ask me to come play,” he laughs. “I’m crazy.”

It’s safe to say that Oliveri has been ev’rywhere, man. But for those living under a metal rock for the past decades, how would you describe the man?

“I’m handsome as hell,” he laughs, with that classic Californian drawl. “Great sense of humour. I like long walks on the beach. Camping’s a plus. Public displays of affection; I frown on infidelity…

“I try to keep doors open for people,” he continues, in earnest, “because that’s what my Mom taught me. I’m not mean unless someone’s mean to me. I like to have beers and smile. I like girls, and cars… Normal dude, I guess. Usual shit. That’s me.”

Formed by his guidance of his dear Mama and “living out in the desert”, Oliveri’s deep dip into the music of his time shaped him to where he is, and to what he is, now.

But it’s not just the musical stirs of metal/punk sound, but the ethos, the attitude, of the music that keeps Oliveri’s motor ticking.

“I like SO much stuff. I don’t just like hardcore music. It doesn’t matter what genre it is; if a band’s good, it’s good. Johnny Cash is great. The songs he chose to do by The Peoples, he made his own. He didn’t write a lot of his own stuff, but the stuff is did write is great too. He was fantastic.

“Anything controversial that’s gonna make my hair grow at the back of my neck and go, “Hol-eee shit! Did he just say that?” I love that. Bands like Trash Talk from Australia. Bands that are pissed off and mean it, you know? Bands that’ve got somethin’ to say. The world’s a crazy place and there are a lot of things to not be happy about. When you can hear music and let it out; to use that musical outlet, to let it escape and feel better, you know? Or make you think about it because they’re singing about it. That’s not a bad thing either.”

Many sips of beer in, talk turns to the past.

“I’m proud of my past,” he states in authoritarian fashion. “And I’m proud of my present, because of my past. I’ve not done anything, musically, that I didn’t like, which is important to me. Because when I play acoustic and put my name up on a marquee I can hold my head up because I never played with any bullshit bands. If I said yes to something, it’s because I listened to it and I liked it. There’s about 68 releases that I’m on. Who’s counting?”

With the inevitable highs and low of any longstanding career, one thing has remained constant for Oliveri.

“I’ve always written music,” he says. “It hasn’t always been good! It’s changed over time. When I started, it wasn’t about the fame. I stopped thinking about “making it”. Then Queens happened and I was like, “Wow!”.

“I didn’t come out as a great songwriter; my favourite songwriters are not me. I don’t look at myself that way. I do like the music that I write, though. It’s gotten better over the years for sure. The way I write has got bigger ‘n’ broader ‘n’ better ‘n’ more worldly… And everything, y’know, both musically and lyrically.”

There’s a joke in the journalism industry that one of worst, insipid, unoriginal questions you can ask is, “Where do you get your ideas from?” This said, without even daring to broach such a faux pas, Oliveri is good enough to give an insight into his creative mind, and put into words that ethereal concept known as “ideas”.

“Different things inspire me when I write music,” he muses. “Sometimes I’ve have a lyric or an idea in my head, or an idea of how I want something sung – a lyric, or a group vocal – a one-line hook thing that could be the chorus. I believe a song should have a repeating chorus that grabs people, no matter how heavy or how fast the music is. It’s important to have a pop sensibility in your songwriting; to have a sing-along kinda something in there. The Ramones, basically; ’50s doowop rock ‘n’ roll sped up to be high-octane fast. They were so good at it. Things like Commando. It’s still in my head, and they’re long gone. So they must be doing something right.

Turning to the now, July sees the return of Oliveri to Australia; a prospect that has the man ponder eagerly on what’s to come, as well as reflect on the Australian music scene as a whole.

“I don’t know a whole lot about the bands I’ll be playing with,” he admits. “Christian Tryhorn of Beats Cartel puts that together. Last time I played with a different band in every town and played with some brilliant musicians. I always trust Christian; he chooses the people, and he did a good job last time. I was a bit nervous at first because I didn’t know them. And we rocked it. Everybody was super great, and I had such a good time.

“As for [Australian] bands, the High Test boys are awesome,” he says. “Distortion kick ass. Of course the Hard-Ons; they’re a staple. Blackie is great, just fantastic. Michele Madden [of Tourettes] is out of her mind, a great singer; I’m a big fan of hers. She kills it on stage.

“And there’s the classics like AC/DC and Rose Tattoo; people like them, of course. The Saints! C’moooon. But I don’t know about the music scene that’s going on there now. I know there’s some great bands down there. What inspires me is Australian musicians playing because they love it; not for the beer, not for the money. Because they love it. Not for anything else. Because they need to get it out and play.”

And finally, we turn our attention to our beloved Canberra, where Oliveri can not only rock another fast and furious set, but possibly add to his Animal Bingo card.

“I’ve been to Canberra a couple of times,” he reflects. “I tell ya, the first time I went there was with Michele Madden a few years ago. I said to her: I wanna see a kangaroo. OK? I’ve never seen a kangaroo in the flesh. To you guys, no big thing. To me, big deal; California kid.

“So she had her Mom drive us to this park, just off the road. We got there and I started laughing: ‘Your back’s all full of flies!’ I point and laugh. ‘Yours too!’ they say. That was news to me. And then there was thing – boing-boing-boing – and there they were. Pretty close! It was cool! I was impressed.

“I saw a funnel web spider in Sydney, in a windowsill. I said, ‘Why don’t you clear them out?’ and they were like, ‘They’re pretty cool, aren’t they?’ And I’m like, ‘No! No they are not!’ But I lived, I made it through.”

Nick Oliveri hits The Basement on Wednesday, 3 July, supported by Russian punks Svetlanas, as well as Sons of Kyuss (does Kyuss) and Sarky Bastard. Tix are $30/$40 (VIP available) from beatscartel.com/tickets