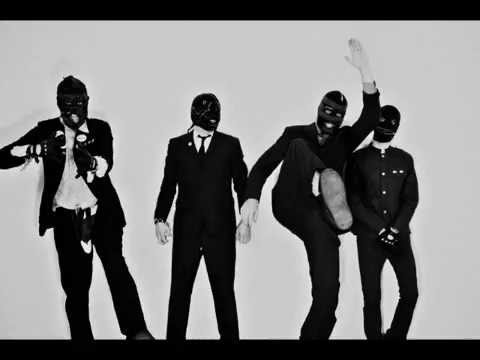 There’s a couple of heavily inspired by ’80s/’70s punk releases floating around this issue. Normally, as a parochial supporter of Australian music, I would be all about the Amyl & The Sniffers record, but when this came across my radar this month, all other nostalgia dependent garage rock music took a distant back seat to this blisteringly fantastic ten song collection.

The Swedish band has been together since 1997. I discovered them in 2005 on 7” Your Mom is a Fucking Mongo under the moniker Sir Henry Fiat’s Bastard and the sheer unpretentious glory of this band was apparent even then. I was all about it from there but they didn’t make it easy to follow them. They’re elusive!

They have over 15 releases, have worn masks the whole time, and haven’t put out a full length album since 2008’s Mondo Blotto. Vocalist, Sir Henry Fiat, took on another band this decade, called Friends of Dorothy and produced a bunch of releases of which The Man With The Machine EP and The Man Without DNA album I would recommend should this intrigue you.

Then out of the blue comes Fiat Currency. 22 minutes is potentially a stretch to describe a full length album, but I put it on two weeks ago and have absolutely flogged it subsequently and it’s hard to stop recommending it to mates on text messages and social media, so here’s the review.

We Got Issues kicks off the record with a killer intro/outro riff that bookends a savagely catchy tune introducing the band and ingratiating the listener with the message that, “Just like me, just like you, we got issues too,” over a verse riff that is as Devo as it gets without whipping something.

Watch Us Mutate turns the influences to English classic punk rock, Concussion Device maintains the English flavour with riffs that remind me of The Jam on methamphetamine with a chorus that’s almost as addictive.

The Corrector blasts by with a set of riffs I would describe as being “angular” and typifies the production on this album. I’ve seen video of their guitarist Frank E. Male playing the see-through Dan Armstrong guitar and that’s what I picture when I hear his tone on the record. It’s a clean, clear guitar played with zest and aggression that doesn’t mask its intent, which is to blitz you with riffs and little segue parts in between that I just can’t stop lapping up.

The song also demonstrates how they use dynamics to make the songs that are barely two minutes long feel much longer. A quieter breakdown, before dropping in a melodious lyric, that defines my inability to get these songs out of my head. “You don’t stand a chance,” is sung with a melody line that reminds me of Blackie Hard-Ons channelling The Beach Boys.

Have Love Will Ferrell simultaneously spoofs on the classic song title by The Sonics and provides an ode to wannerism (I wanna iPad, I wanna skateboard, I wanna new tattoo). Don Wanna (drums) gets a love letter with potentially the most catchy song of the whole record – a tall order – on Don Wanna Meets The FBI with some filthy garage surf lines and a herky jerky chorus that means you barely have time to catch your breath.

Nine Months BC brings a hectic close to Sir Fiat’s contribution to the record in raucous, barely controlled fashion, before the almost surf rock instrumental Fiat Currency closes the album out.

22 minutes, ten songs, all the garage deliciousness you can pack into that time. You will replay this. You need this. This is vital. It’s not nostalgia in the form of an oft photocopied set of tropes. It is inspired, genuine affection for the past coupled with great song writing, hooks, and melodies and that makes it a winner in any era. Don’t sleep.