Music and drawing performance with:

Lena Czerniawska
Lena was born in 1989 in Nowy Dwór Mazowiecki, in Poland. In her childhood and youth, she was inspired by her mother, Julia Wernio, who was a theatre director. Subsequently, her early influences came from the theatre, as well as from the literature, music, and visual art she was exposed to during these years. Czerniawska lived in Wrocław, and studied in studios of Eugeniusz Get-Stankiewicz, Eugeniusz Smoliński, and Michał Jędrzejewski at the Academy of Fine Arts, majoring in graphic arts and developing the beginnings of her practice within drawing and performing arts. Later, she began teaching at the academy as an assistant to professor Jacek Szewczyk. In 2017, Czerniawska moved to Berlin to focus on her individual career.  Her main artistic focus is drawing, and she sees this as the critical component of her practice from which her ideas are derived. Her work encompasses installation, graphic design, and performing, particularly with experimental or improvised music. Conceptually, Lena’s multifaceted practice investigates reality through image and temporality, and aims at harnessing the various influences across media that she has embraced over the years.

Josten Myburgh
Josten is a musician and organiser based in Whadjuk Noongar country in Boorloo (Perth, Western Australia). His music involves composition, field recordings, performing, and improvising using electro-acoustic material and woodwinds.
He is part of the management of the label Tone List, dedicated to fostering exploratory music in Perth, and curates its annual Audible Edge festival and the Sounding Together mentorship/residency. He is the audio documentarian for the label, and additionally produces interviews and material for online publication. He also teaches, including lecturing at the WA Academy of Performing Arts. Notable performances include the Fremantle Biennale, Supersense Festival of the Ecstatic (Melbourne), Festival Cable#8 (Nantes), KLEX Festival (Kuala Lumpur), Klangraum Festival (Düsseldorf), Inland Concert Series (Melbourne/Perth), AudioArt Festival (Krakow), Club Zho (Perth), and the Totally Huge New Music Festival (Perth). He has been involved with releases on Shame File Music, Edition Wandelweiser, Flaming Pines, and Tone List, and has been commissioned by performers and organisations including Catherine Ashley, Jameson Feakes, and Barna Mia Eco Education (Parks and Wildlife Service, Narrogin). He plays with musicians and artists in Western Australia, such as Joshua Pether, Daisy Sanders, Djuna Lee, Lenny Jacobs, Noemie Huttner-Koros and Jameson Feakes, as well as improvisers from other parts of the world, including Simon Charles, Lena Czerniawska, Emilio Gordoa, Michael McNab, Matthias Müller and Adam Pultz-Melbye.

Laura Altman, clarinet, Australia
Laura is a clarinetist, improvisor, and composer, born and based in Sydney, Australia. She has been an important voice in the Sydney improvised music scene since 2007, playing with groups such as The Splinter Orchestra and Prophets, and collaborating with many other Australian and international musicians. Laura has toured Australia and Europe with a range of projects, including the internationally renowned trio Great Waitress, featuring Monica Brooks on accordion and Berlin-based pianist Magda Mayas, who also have several acclaimed CD and LP releases to their name. As a composer, Laura writes both instrumental and electro-acoustic music. She has had works commissioned and performed by various ensembles, including Sydney Antiphony and Ensemble Offspring, and has developed exploratory pieces for primary-school students. She has more recently been exploring sound installations. Laura also plays clarinet in and composes for folk/balkan/jazz ensemble Chaika. Laura organises exploratory music events in Sydney, including the NOW now Series and Festival of Exploratory Music from 2010 until 2013, and the current Nights at Tempe series. She has co-founded the Sydney exploratory music calendar www.emus.space. https://youtu.be/-oFRznISths.

Alexander Hunter, viola de gamba, Canberra
Dr Alexander Hunter studied composition, double bass, viola da gamba, and ethnomusicology at Northern Illinois University, and received a PhD in composition from Edinburgh Napier University. Currently lecturing at the Australian National University, Hunter teaches composition and theory, and directs the ANU Experimental Music Studio. His work as a composer is based on open works, which encourage a fluid relationship between composer, score, and performer. Hunter’s current performance-led research is based on his participation in a trio of improvisers utilising the combination of open works, early instruments, and electroacoustic techniques and spatialisation. As a composer, Hunter has worked with Mabel Kwan (Chicago), the Quiet Music Ensemble (Cork), Pesedjet (members of Chicago-based Ensemble Dal Niente), the Chimera Ensemble (York), the Edinburgh Quartet (Edinburgh), Scottish Voices (Glasgow), ensemble a.pe.ri.od.ic (Chicago), and others. His work as a researcher has been focused on the music of the New York School; reductionist improvisers and other improvisers and improvisation ensembles; the writings of Rob Haskins and Jonathan D. Kramer; feminism, anarchism and leftist politics in composition and performance; and open musical forms and notation. https://alexanderhunter.co.uk/

Richard Johnson, wind instruments, Canberra
Richard performs with the texture of sound on soprano/baritone saxophone and bass clarinet and is experimenting with use of a bass drum with soprano saxophone to create a language of microtonal textural resonance. Also he has been making instruments from conical gourds from PNG, which allow the stripping back of the wind instruments to their most visceral and most sensuous form and allow for the exploration of extended techniques. He has performed at the SoundOut 2010–2016 festivals, What is Music Festival, and Nownow Festival; at the Make it Now performances; with the Brice Glace Ensemble and the 102 Club Orkestra in Grenoble France; in the “Whip it“ series in Sydney; and in various Precipice annual Improv workshops hosted by Tony Osbourne, as well as hosting local/interstate/international improvisation nights in Canberra. He is the Director/Curator/Producer/Administrator at SoundOut festivals. As a sound artist, he worked with renowned visual Artist Savanhdary Vongpoothorn for the Australia Exhibition at The Casula Power House and collaborated with conceptual-visual artist Denise Higgins on soundscapes. He has performed with the likes of Jaap Blonk, Jon Rose, Hans Koch, Guylaine Cosseron, Jim Denley, Kim Myhr, Annette Giesreigl, Rodrigo Motoya, Antonio Panda Gianfratti, Thomas Rohrer, Luc Houtkamp, Clayton Thomas, Isaiah Ceccarelli, Yan Jun, Laura Altman, Michael Norris, and Evan Dorian. He currently performs in a wind trio with John Porter and Rhys Butler called Psithurism, which has a digital release with the renowned Canadian clarinetist Francois Houle and a new CD release titled Lure on the SoundOut label with Xavier Charles in 2017 (SO-003), and in June 2016 released a CD with Rhys Butler, Guylaine Cosseron, and Stephen Roach titled Swarm (SoundOut CD’s SO-001). Lure CD Review: http://www.freejazzblog.org/2018/06/recent-releases-of-french-clarinetist.html
https://soundoutrecordings.bandcamp.com/.

Tony Osbourne, performer vocals, Sydney
Tony has collaborated with many visual, sound, theatre, and dance artists. Since 2002, he has collaborated with Cameron Deyell, Clayton Thomas, Clare Cooper, Sam Pettigrew, Gail Priest, Amanda Stewart, and Rishin Singh and has appeared in numerous NowNow Festivals in Sydney. As MADHEAD (solo vocal/electronics), he has performed in Sydney, Melbourne, Brisbane, and, at Soundout 2012 (with Rishin Singh), Canberra. His continuing duet project as vocalist with sax player Andrew Fedorovitch has also been heard in Sydney (Nownow Festival) and Berlin (Studio 8). He is a bass singer with Sydney University Graduate Choir and with Splinter Orchestra (both since 2009). He performs and teaches performance improvisation around Australia, and his 30 years of theatre and dance practice has, in the last three years, taken him to perform in Basel, Shanghai, and New York. He also writes on music and dance for RealTime Arts magazine. 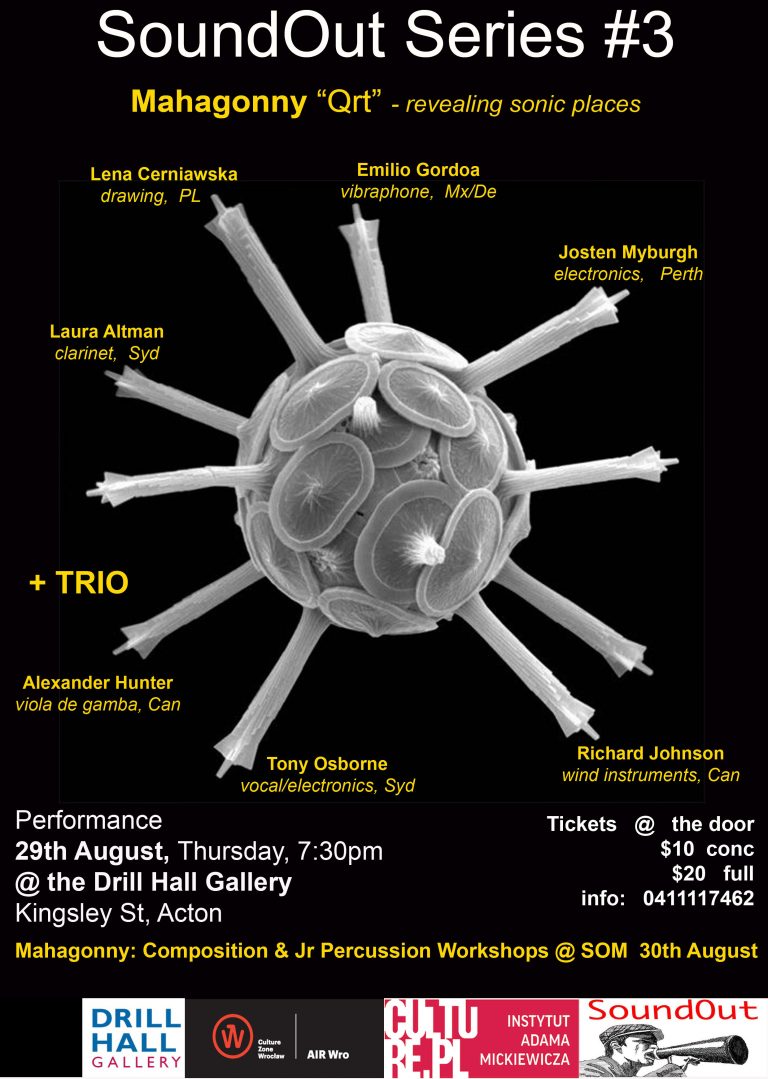