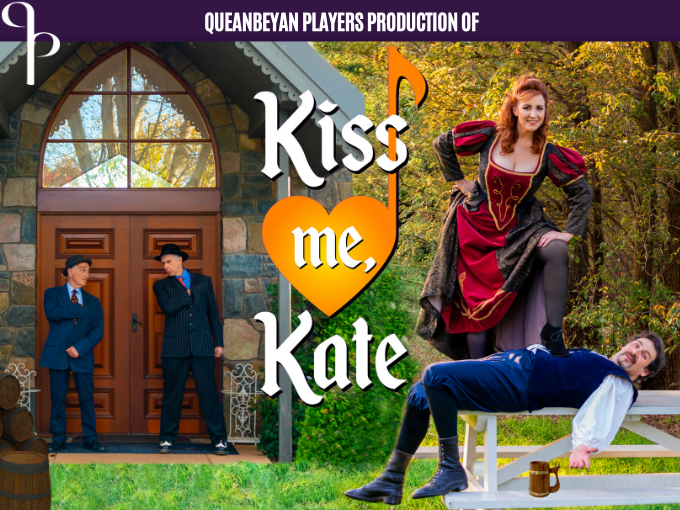 “Kiss Me, Kate” is the Broadway hit musical written by Bella and Samuel Spewack with music and lyrics by the brilliant Cole Porter. It was Porter’s response to Rodgers and Hammerstein’s “Oklahoma!” (QP’s third production for 2021) and other “integrated musicals” and was the first show he wrote in which the music and lyrics are firmly connected to the script.

The show opens with a theatre company preparing to stage a musical version of William Shakespeare’s “The Taming of the Shrew”. The conflict on and off-stage between Fred Graham, the show’s director, producer and star, and his leading lady(and ex-wife!) Lilli Vanessi, parallels their roles in the play as Petruchio (the suitor) and Kate (the Shrew) undertake an historic battle of the sexes. To add to the hilarity is the strange romance between, Lois Lane, the flirty actress playing Bianca and her gambler boyfriend, Bill, who runs afoul of some “old school” gangsters (featuring two of Canberra/Queanbeyan’s best and most loved actors Dick Goldberg and David “Dogbox” Cannell) who teach us how to “Brush Up Your Shakespeare”!

This is a classic “golden era” musical comedy but refreshed for and set in the 21st century starring Janelle McMenamin (Hello Dolly!, Next To Normal) as Lilli/Kate, Adam Best (Barnum) as Fred/Petruchio, Sammy Marceddo (We Will Rock You, 42nd Street) as Lois/Bianca and Nathaneal Patterson (Les Misérables, Cosi Fan Tutte) as Bill/Lucentio.

AUDIENCE ADVICE: limited Haze effects, moderate coarse language
LOCKOUT: if late you will be seated when there is a suitable break in the performance
RUNNING TIME: 2 hours 30 minutes inclusive of a 20 minute interval