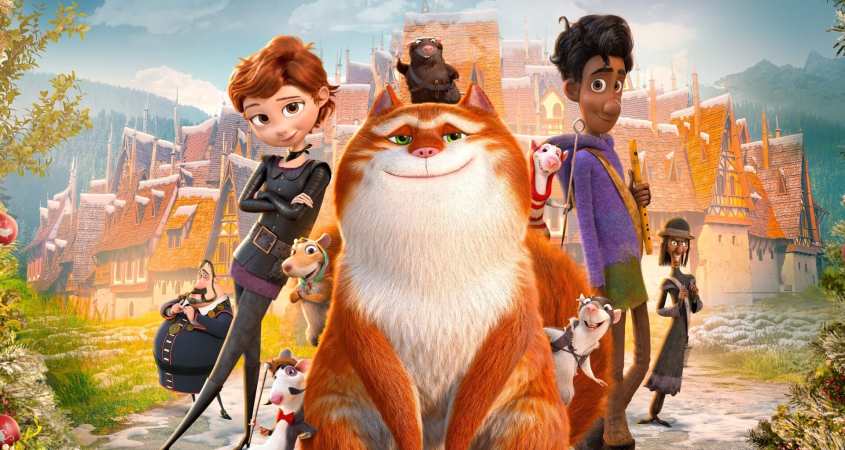 Keith (Himesh Patel), a shy dreamer with great musical talent, along with his talking cat companion, The Amazing Maurice (Hugh Laurie), go from town to town running a money-making scam.  Integral to the scam are their literate rat friends Dangerous Beans (David Tennant), Peaches (Gemma Arterton), Sardines (Joe Sugg), Darkan (Ariyon Bakare), Nourishing (Julie Atherton), and the rest of the rat crew, whose job it is to create the illusion of a rat plague, which is “dealt with” (for a price) by Maurice and Keith.  But when the gang enters its next town to do its work, something seems awry.

The town, ostensibly run by the Mayor (Hugh Bonneville), is really controlled by the evil Bossman (David Thewlis) and his henchmen, but the Mayor’s real problem is his daughter, Malicia (Emilia Clarke), who simply won’t stop reading books.  When Malicia chances upon Keith and Maurice, she, in good readerly style, recognises an adventure just waiting to be had.  And so the unlikely band finds itself adventuring rather than sanely running away from trouble.

Originally penned as a book by beloved author Terry Pratchett, The Amazing Maurice in animated form brings to life some of Pratchett’s quirky genius, filling the screen with a host of endearing rats, a love-struck, bumbling Keith, a feisty Malicia, an unforgettable Pied Piper (Rob Brydon), a dastardly Bossman, and those old friends of anyone who has read Pratchett: Death and his apprentice.  Delightful inclusions from Pratchett’s other books too give a nod to the great man.

Rich with imaginatively rendered characters and settings, action aplenty, a terrific musical score, and lots of “humanness”, The Amazing Maurice is a tale within a tale (dare I say with tails featuring large) that will delight anyone over the age of about four or five.