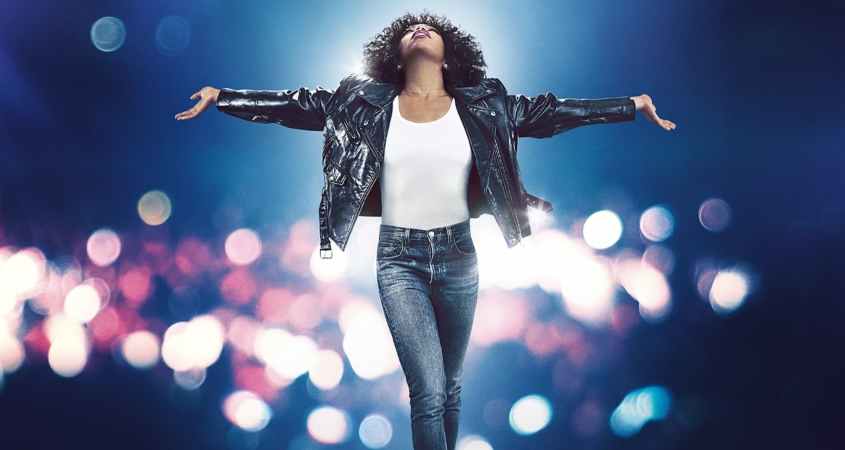 When legendary recording mogul Clive Davis first heard Whitney Houston sing, he spontaneously commented to a colleague that he may have just heard the greatest voice of her generation.  Since Houston’s death, a documentary and a television movie have been made on her, but Davis felt that both had failed to capture her soul, her dignity, what people want to know about her, and, most importantly, her music and her voice.  So Davis became an enthusiastic co-producer of a movie that aimed to do all that: I Wanna Dance With Somebody.

I Wanna Dance With Somebody covers the major events of Houston’s life from a short time before Davis’s discovery of her as a singing talent to her last hours, with Naomi Ackie playing Houston.  These events include big tours; Houston’s marriage to rapper Bobby Brown and his subsequent influence on her career and health; a number of family relationships, including that with her daughter; and (at least tangentially) her role, co-starring with Kevin Costner, in The Bodyguard.  The film effectively limits itself to those events with the greatest effect on Houston’s career and relationships, from her family and the lover who later became her assistant, to her abidingly loyal recording executive producer.

One of the great things about I Wanna Dance With Somebody is that it gives us again a good taste of Houston’s best-loved recordings.  Though Ackie as Houston sings a couple of pieces herself in behind-the-scenes mode and makes a creditable job of them, the filmmakers made the right decision in having her lip-sync perfectly to Houston’s voice.

Without prying too deeply into her personal life, I Wanna Dance With Somebody provides a sympathetic insight into Whitney Houston’s decisions, relationships, and life changes; into her family’s various roles in her career; and into the destructive toll of smoking on her voice and her career.  Most memorably, it lets us feel what she felt in choosing and singing the songs by which we best remember her.