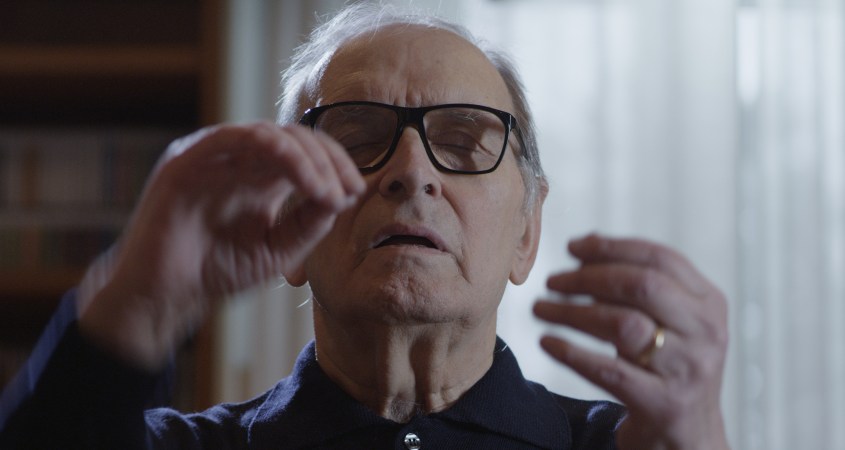 Quick question: what does Zeffirelli’s Hamlet share with The Untouchables and The Good, the Bad, and the Ugly?  Answer: film composer Ennio Morricone — who from 1960 to 2020 composed the soundtracks to more than five hundred movies and television series and, for the most part, recorded them too, including television documentaries and films as diverse as the 1960s comedies The Fascist and The Twelve-Handed Men of Mars, dramas Once Upon a Time in the West and The Mission, and romantic dramas Cinema Paradiso and Malena.

In Ennio: The Maestro, this master of the medium, who has been called the world’s greatest composer of counterpoint, describes how at first he felt he had betrayed his musical heritage by stooping to write music for film, taking many decades to appreciate that film music deserves its place amongst musical genres.  Hearing Morricone himself opens your eyes and ears to that recognition and to the humility so common in geniuses.

We see Morricone at work composing and conducting, and recounting how various projects came into being, but it’s fascinating too to hear what others have to say of him.  Singer–songwriters from Joan Baez and Quincy Jones to Bruce Springsteen speak of the inspiration Morricone continues to give them.  Many fellow composers, including Hans Zimmer and John Williams, detail his irreproducible musical genius.  A roll call of remarkable directors from around the world describe how he turned their visions into music, attributing many of their successes to Morricone’s unique creativity in devising haunting sounds, insistent beats, catchy melodies, and surprising harmonies.

Including plenty of movie footage that Morricone’s music has made immortal, Ennio: The Maestro creates an impressive, even moving, record of the legacy of a creative genius to whom western culture owes a great debt.  See it while you can.