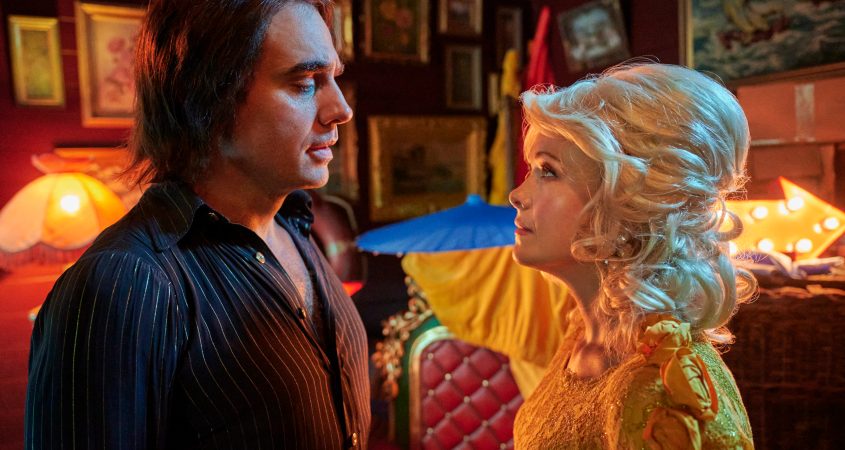 Red (Krew Boylan) is finding her career as a real-estate agent following a familiar pattern.  It’s not working out.  And her personal life isn’t much better.  She’s failed to have a lasting relationship, let alone manage to get married, and she lives in her mother’s converted garage.  Her mother, Viv (Jean Kittson), takes every opportunity to point out Red’s failings to her.  Red can do nothing right.  At least she has the loving support of her Gramps (Tony Barry) and her lifelong friend, Francis (Thomas Campbell).

The thing about Red is that she tries her best, is more cheerful than most in similar circumstances, and does all she can to embrace life and join in the spirit of things.  When things go even more wrong than usual in spite of that, Red finds herself thinking more and more about her lifelong passion — Dolly Parton.  What would Dolly do if she were in Red’s position?  And so begins a rollercoaster ride through the fascinating, colourful, manic world of impersonation.  Of course, impersonation’s a tough gig.  Impersonators aren’t in short supply, and, as are so many other pursuits in life, it’s a very competitive game.

Krew Boylan is fabulous as Red, strong-minded and determined, but loveable mostly for her quirkiness and irrepressible spirit.  Boylan brings Red bursting to life as someone you’d love to know.  Jean Kittson as Viv is delightfully mean and judgemental, whilst promoting herself as a free spirit; Barry as Gramps says hardly a word, but he doesn’t need to — he says everything with his face.  Campbell as Francis draws you to his kind, loyal, continually disappointed heart, and Webber as Kenny does a brilliant job as a weak, vacuous character living in a self-deluding world.

Seriously Red is terrific fun from start to finish.  It’s a delightful story of a young woman trying to find her place in the world.  She may be a round peg trying to squash herself in one square hole after another, but the truth is that she’s doesn’t belong in a square hole, and if she is to find where she does belong she will have to face one or two painful truths.