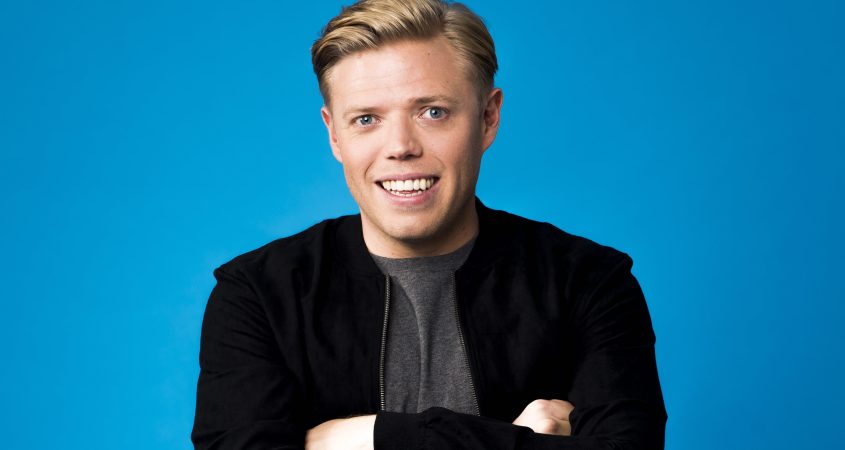 There are three immediate aspects that mark UK comedian, host, podcaster, and author Rob Beckett; proudly sporting his working class background, authenticity, and being one of the most beloved comics in his industry.

You can add to that, of course, a genuine desire to make people laugh; something he very much intends to do with his upcoming Australia tour, and Canberra stopover. This is hardly a surprise for a comedian, you may ponder, but Beckett’s singular focus is to be admired.

“I’ve never really been a big fan of a narrative show,” Beckett reveals via Zoom post gig, proving that he is rarely off the clock. “I find it quite unnecessarily clunky and boring. And I used to think that’s because I’m not a proper writer, and couldn’t do that.

“But actually, I realised that a lot of those people can’t be funny all the way through, and my strength is that I’m good in-the-moment. It’s really authentic, and honest. It’s something I’ve made a virtue of rather than beat myself up for not having that narrative or structure. It suits my style.”

Authenticity is important to Beckett, spurning a ghostwriter for his autobiography A Class Act to instead take on the weighty task of penning it himself.

“That was something I wanted to do for myself, to prove that I could do it,” he says. “There was impostor syndrome, and the poverty mindset, and having these negative anxiety faults. A lot of the time, they’re not real, they’re not true; you create this narrative yourself. ‘I am not an academic.’

“If you don’t label yourself, there’s more freedom to find out what you can be. I can spend too long saying I’m not able to do this. That’s why I forced myself to do it. It was hard. It was the hardest thing I’ve ever done. But it felt really good when I did it, because it was out of my comfort zone.”

Operating outside of a comfort zone has led to some of Beckett’s greatest achievements to date, pivoting the financial crisis of 2008 into a stand-up career, and Covid into a hugely successful comedy-parenting podcast with fellow comic and friend Josh Widdicombe, Parenting Hell. Not to mention a much needed life and mental health check.

“I was approaching burnout from gigging non stop for ten years,” Beckett reveals. “Like five gigs a week; I was working like a maniac. So it was good to put stuff in perspective and find that bit of balance. It’s one of those things where most good things come out of a bad situation.

“During the 2008 recession, I got made redundant, and I started doing stand-up. And then, in lockdown, we started the podcast, and that’s become a really popular thing that me and Josh both love to do.

Yes, about that podcast. What started as a “What’s App group gotten out of hand” and a sanity break from being housebound with children has grown into a chart-topping success. And the podcast’s benefits don’t stop there for Beckett as it, once again, feeds back into his core principle to simply make people laugh.

“I couldn’t believe how popular it got,” he says of the podcast. “But looking back, of course, there needs to be a comedy podcast about kids. Especially with the amount of time parents are listening to podcasts when they’re walking the baby in a pram or are up all night or driving their kids around and stuff.

“It’s great, coz I never wanted to be a stand-up that just banged on about their kids on stage all the time. So we’ve got a podcast to do those jokes. Because no one in the crowd really has kids; they’re normally younger and got more energy and money to go out and book tickets.

“It’s really good, actually, because I get it out my system every week,” Beckett continues. “And then it can free up my brain to think about other routines or other stuff I want to talk about. Kids just consume every waking moment as is and they don’t stop talking at you – dadadadada. We’ve just had half term over here. I love them to pieces, but you just need a little break from them after a while.”

And on this occasion, an extended break from the kids means some time with us lucky Australian audiences. Beckett’s modus operandi remains true.

“My job is to be as funny as possible, not deliver a special narrative show about that time I missed a train,” he says. “And if that means dropping a routine and talking to that person in the audience more, I’ll do that. That’s why I try to create shows that are a bit more fluid, so that’s possible, rather than setting myself up like, ‘Oh my God, tonight, I’ve got to do that three minute monologue that has to hit those points.’

Rob Beckett will be performing his new show Wallop at The Playhouse on Friday, 25 November at 8pm. Tix are $79.90 + bf via Canberra Theatre Centre.