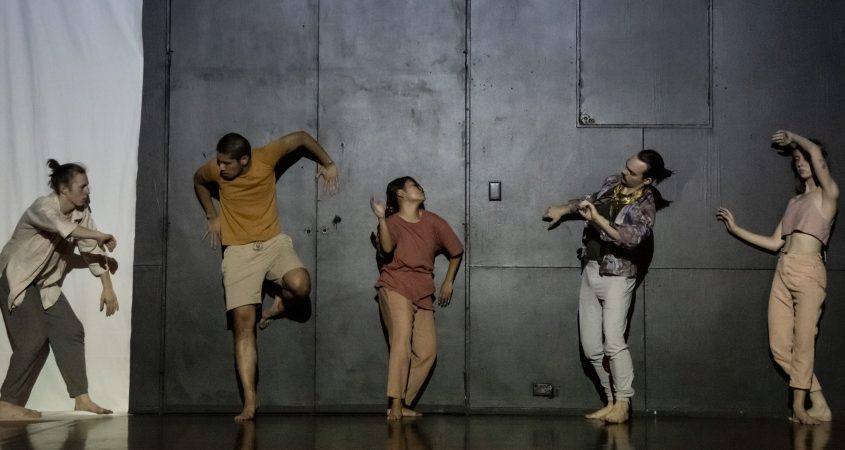 That Was Friday is a new contemporary performance work about distance and connectedness, familiarity and strangeness. An Australian family has become geographically dispersed. Whilst each have created their own communities in their adopted homes and global networks, as a family they have drifted apart. Something has happened to the bonds that once held them close. In order to reconnect, they must relearn how they fit together.

Contemporary social history is marked by a diversity of diversities pivoting on globalised trends in health, sexuality, gender, racism, economics and politics. This is accompanied by shifts in social norms, an increased curiosity, and strange juxtapositions in philosophy across society.

House of Sand‘s new work That Was Friday, which opens onto the nature of distance, connectedness, familiarity and strangeness, embraces the allegory of family reunion and reconnection to delve into the new cultures and communities that are being created and inhabited. It is a multidisciplinary look at the increasing number of ways in which family and communities identify and relate.

House of Sand’s Co-Directors, Charley and Eliza Sanders, have conceived That Was Friday as a multi-discipline contemporary work, layered with drama, dance, film, and music. Charley and Eliza have drawn together an internationally based team comprising playwright Jack Sullivan, composer Mario Spate, and storyteller Amrit Tohari Agamemnoian, supported by video designer Laura Turner.

In conversation with Co-Director Charley and composer Mario to discuss the work, its intent, and its development trajectory, Charley related that the title was sparked by Canberra native Ruby Dixon’s poem That Was Friday.

“It’s kind of Odyssean story, it’s about journeying outward and a return home; principally the return home element,” Charley says. “It’s a coming-of-age for a group of millennial characters, coming home in their late 20s – early 30s. Coming to understand their parents as individual humans and the trials and tribulations that they have gone through and how the parents are also coming to understand their children as independent, adult human beings.

“Re-threading family and intimate community connections and learning from each other across generations about what those patterns of society are, is a major theme of the work,” Charley continues. “The play is essentially kicked off by a key life event that draws the fictional family back together and challenges them to adapt to patterns of diverse society. They come to understand the beauty of the cultures of the alternative families being created in queer and diverse communities.

“The drama is post-dramatum and post-verbatim,” Charley explains. “Sculpted from chunks of material which we have really said, into something more poetic, more theatrical. It doesn’t have that slightly dry vernacular that a lot of verbatim text has. It’s got a bit more movement to it.

“The film, a second element, has a documentary edge to it,” Charley continues. “Laura Turner, the video designer, is the caretaker of Amrit’s story, capturing in real time where she is out in the world, and the process of immigration. Applying to come here to Australia, that failing, immigrating to Canada, living there on a refugee visa, and moving on to applying for permanent residency.”

Acknowledging the four year development of That Was Friday, which intersected with the Black Summer bushfires and then COVID, Charley commented on the impact of this period on the way the work has evolved.

“It’s one of the questions that the work poses; in this day and age, in an increasingly globalising and digitising world, how do we create and maintain communities? Where the tyranny of distance isn’t gone, but it means something different for now. We can connect over Zoom and we can see each other, we can be on the line with our collaborators in New York, Montréal, wherever, in a matter of seconds, at any point we choose.

“But what are its limits?” Charley muses. “It’s not the same as being in a physical room together, being able to give each other a hug and hear each other breathe. That’s why it’s really important that the work happens in space, so you can be there in the room breathing the same air and feeling the same ebb and flow of sound vibrations.

“It’s so central to the work.”

Composer Mario Spate saw this challenge in creating That Was Friday slightly differently.

“Being forced to be apart whilst you’re creating fed into the idea of the work beautifully,” Mario muses. “I was able to draw on the feeling of being separated from my own family. That disconnected longing for your family and a sense of ‘this is where I come from’ really played into the music I composed for what Charley and Eliza are creating.

“The logistical issues have tied everyone’s hands,” Mario continues. “However, those restrictions kind of streamlined the essence of the thing. In less than ideal circumstances, you have to make bold choices because you don’t have the luxury of seeing how it works in the room.”

As for the music itself…

“The score is very textural with themes that come in and out of focus as your sense of home changes, going in and out of focus during your life,” Mario says. “Invoking in the music how, over time, as you become separated from home, the idea of home, those feelings and memories change and morph into your own version of them.”

Expanding on his vision for the score, Mario continued.

“I see the score, as something that provides the audience a flooring in the world that they’re walking through. Supporting them to feel and yet not distracting them.

“The first thing I did was to try and find the themes of the family and weave these across the different disciplines and worlds within the show, providing a through line so that it all feels in the same world with just slightly different flavours so that the dance, drama, and film connect.

“Composing for these three elements has been much more like scoring a film than a more linear theatre production,” Mario reveals. “Evoking recurring and intertwining themes to provide the audience with anchor points and connections to lead them through That Was Friday’s purposefully disjointed worlds.

“I’ve played a lot with space and density as opposites, and how these two connect seamlessly, trying to be as subtle as possible so that the audience questions their sense of uncomfortableness, when the music has swelled and grown to distort and break apart and there is a realisation of the intensity of the moment.”

Mario has sought material from many places to create such a compelling soundscape.

“Working in a studio environment, I’ve drawn inspiration from being in the world outside the studio, using field recordings as source material,” Mario says of his technical approach. The work is a good 50-50 blend of orchestrated studio/computer work and stuff that brings in the world around you to become a texture or a voice in an instrument.

“I’ve tried to find the musical language that leaves room for the text,” Mario says. “The score creates a mood, a coloured and melodic base, less focused on the percussive, so where there is text, it doesn’t distract.

“But for the dance sections it is more percussive and more noticeable.”

Picking up on the dance element, Charley continues:

“The idea of reaching out to touch across restriction is central to the physical movement of the work. There is that kind of grief of coming together but not quite being able to come together as you would wish.

“Eliza, in choreographing the movement of the dance, definitely followed this thread of reaching out – a yearning to touch, that I think people will find quite potent in this particular time in which we live.”

Expressing the creative team’s enthusiasm for That Was Friday, Charley concluded:

“The feelings and the experiences, the body experiences and the emotions, that under gird the work are actually similar and commonly human.

“It feels familiar, even though it is a little bit different.”

House of Sand’s That Was Friday is on at the Belconnen Arts Centre from 23 -26 November. Tickets are $40/$45 via belcoarts.com.au/friday/