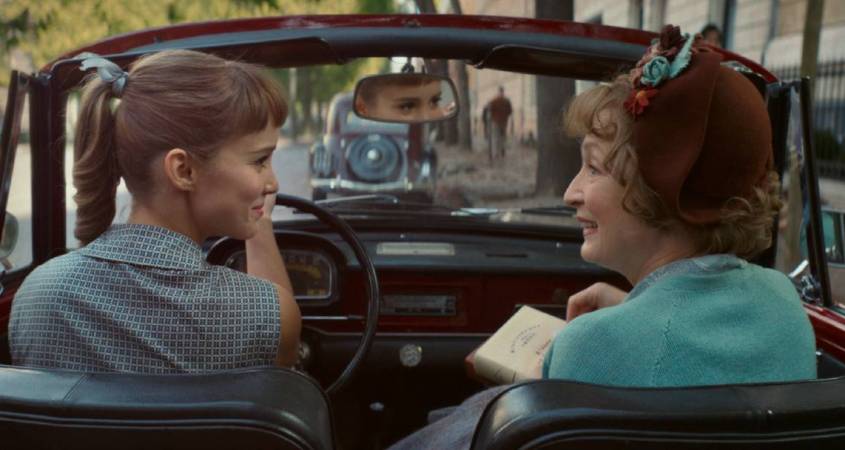 Mrs Ada Harris (Lesley Manville) may have lost her beloved Eddy in the Second World War, but in 1957 London, now working as a cleaner, her memories of him continue to dominate her thoughts.  She and her best friend, Vi Butterfield (Ellen Thomas), also a cleaner, keep each other’s spirits up by staying positive in the face of relentless hardship.

When Mrs Harris is cleaning the mansion of Lady Dant (Anna Chancellor), she comes across an utterly exquisite Dior gown that Lady Dant has had made for herself and is bewitched by it.  So, penny by penny, she saves for a Dior gown for herself.  For a woman in her position the dream is simply unattainable, but fortune arrives from the most unexpected quarter.  And her windfall takes Mrs Harris to Paris to obtain the gown of her dreams.

Despite encountering in Paris the kindness of strangers — André (Lucas Bravo), the Dior accountant; Natasha (Alba Baptista), a beautiful Dior model; and the charming, rich Marquis de Chassagne (Lambert Wilson) — Mrs Harris finds herself up against the snobbish, disapproving Madame Claudine Colbert (Isabelle Huppert), the Dior director, who believes that the likes of Mrs Harris have no place in the haute couture environs of the House of Dior, and trouble brews when Mrs Harris refuses to be shown the door.

Lesley Manville as Mrs Harris is a treat.  She’s loveable, humble, cheerful, and loyal in spite of her difficulties and loneliness.  She’s never gotten over the loss of her husband, Eddy, and everything is measured against what he would or would not have liked.  But her journey in Paris and the love of her friends back home lead her to see that there’s more life to be lived than she’d imagined.

Isabelle Huppert makes for Mrs Harris’s perfect adversary in Madame Claudine Colbert.  Her manners are impeccable, if frosty toward a lowly cleaning woman; her understanding of haute couture is unimpeachable; her elegance is almost tangible; and her dedication to the House of Dior is such that she will do all in her power to maintain its exclusivity.

And the performances by the rest of the cast genuinely bring the viewer into the time.  Impoverished post-war Britain, still with its haves and far commoner have-nots, is trying to raise itself from the mess of the war, and Paris is doing its best to celebrate life and beauty in the face of widespread destruction.  But these realities are treated with a light hand.  This film is not a comment on the war, but rather a celebration of the human heart, friendship, and love.

Anyone who has felt loss and been consumed by a wish for beauty will find it impossible not to champion Mrs Harris on her well-deserved way to her dream gown.