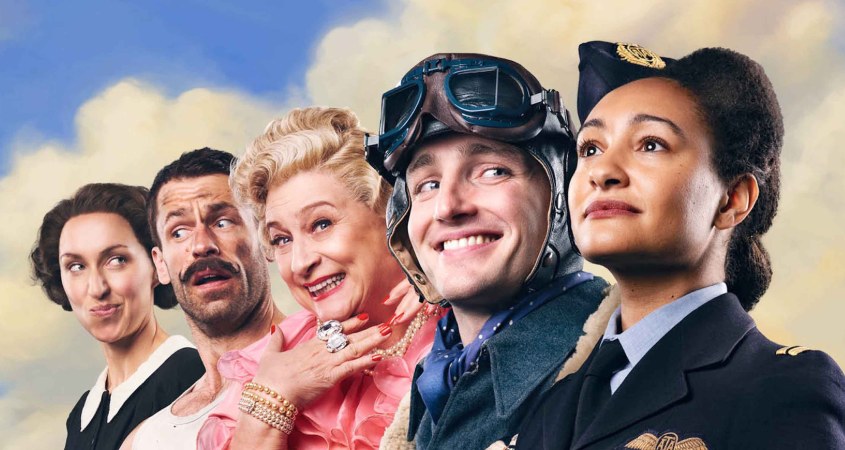 In the middle of the long-running Battle of Britain, airman Jack Absolute (Laurie Davidson), hero of the day, takes the opportunity of a few hours on the ground to try to restore an incipient romance with Lydia Languish (Natalie Simpson).

But Lydia, an Air Force pilot herself, is resistant.  Rejecting the values of her privileged upbringing for ideals of progressive egalitarianism, she wants to believe in the possibility of love unconstrained by social barriers and so has chosen to settle her affections on an aircraft mechanic, Dudley Scunthorpe (Kelvin Fletcher).  Jack decides to woo Lydia in the guise of Scunthorpe.

Further difficulties arise from the insistence of Jack’s stuffy father, Sir Anthony Absolute (Peter Forbes), that he marry a rich girl of property — and that of Lydia’s aunt, Mrs Malaprop (Caroline Quentin), that Lydia marry the unknown son of a distinguished army officer.

Meanwhile, Lydia must deal gently with attempts by two further airmen to snare her affections.

Yes, it’s all a bit complicated, but you’ll quickly get the hang of it; the characters are easily distinguished, and their actions, however wise or otherwise, make sense, even if those same actions complicate their lives raucously.  And, of course, their personal stories are inevitably influenced by the immediate dangers that the Battle of Britain holds for them all.

Jack Absolute and his fellow characters are larger than life, even coming across initially as a little too large, and they perfectly populate a story that — if only they could get a pig airborne — just might be true.  Of course, with the necessity for a stage production to present everything visually toward an audience seated before it, a film of such a performance could be perfectly dreadful.  Yet NT Live, using multiple cameras and clever design of moving sets, does an immaculate job of filming it from many viewpoints, creating a rather more filmic illusion.  And projections right onto the set even offer aerial perspectives of the battle itself.

With likeable, witty characters; great lines; and simply delightful comic confusion all around, this very, very funny performance is one of a kind.  Replete with multiple flyby malapropisms, highly improper provocations, and drily witty insults, Jack Absolute Flies Again is a production that leads its cinema audiences to join its live audience in applauding, and one that will stay with you.