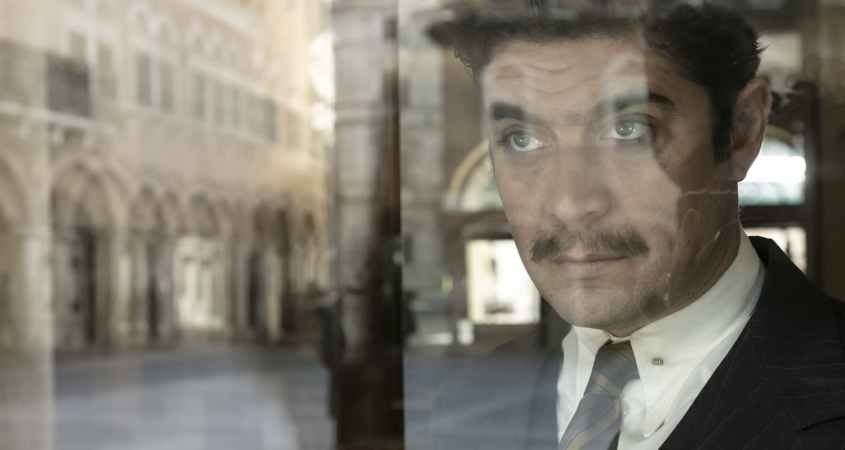 In 1930s Fascist Italy, wounded World War I veteran Luciano (Riccardo Scamarcio) runs a successful, up-market restaurant in the provincial town of Ascoli Piceno.  Luciano keeps himself to himself rather than associate with old comrades or others, and focuses on keeping his restaurant successful.  Whatever his past may have been, his present is completely private.

A young woman, Anna (Benedetta Porcoroli), arrives in town desperate for a job.  She begs Luciano for a chance.  Initially reluctant to hire her without knowing anything about her, he agrees to give her a trial in the kitchen.  Anna shows herself more than competent and so is taken on full time.  It’s clear that there’s more to her story than Anna is telling, but Luciano doesn’t pry.  As long as Anna does her job, she will remain on staff.

Soon afterward, the true threat to ordinary people’s freedom becomes increasingly evident.  Mussolini’s power-mad fascists, who have also become devotees of Hitler, are everywhere, bullying, demanding, and doing whatever and to whomever they wish to.  Freedom of thought and speech and any expression of ideas that do not support party lines become punishable through sheer brutality as decided by local militia.

Luciano, his customers, and his staff are in the spotlight as Luciano’s former comrades occupy his restaurant at will.  Whilst Luciano’s former war service protects him to an extent, that protection cannot be counted on.  No one is safe.

With the political situation worsening, Anna and Luciano’s personal lives have become entangled, though Luciano suspects that Anna hides a great secret.  As fate would have it, when Anna’s secret emerges, Luciano finds himself in an impossible position.  Can he save everyone — anyone — himself?

Capturing both the beauty of the town’s buildings and the elegant decor and artistic sensibilities of the time along with the sense of high-minded culture, the film initially promises a bright future, but gradually it turns dark as one by one people’s individual freedoms evaporate and any suggestion of dissension meets harsh treatment.  Looking back on this time in history, and knowing what ensued during World War II, the film is a stark reminder of the tragedy that in a more ideal world could have been prevented.

Riccardo Scamarcio captures Luciano with great conviction, isolated from others by choice and perhaps lonely; Perhaps it is what happened to him during the war.  Knowing what he does, he with no desire to stir up trouble or participate in the power abuse he sees his former comrades in arms perpetrating; but with little choice other than to obey the increasingly immoral dictates of the local militia as he seeks to protect his staff and himself.

Benedetta Porcoroli does a creditable job as Anna, but is less convincing than Riccardo Scamarcio is as Luciano.  As a woman with a dreadful secret, she would, presumably, behave more circumspectly, seeking above all to avoid attention.  Instead — and this could well be a directorial decision — she sometimes acts like a woman living in today’s world rather than a woman with the dangerous background she has for the 1930s.

Nevertheless, the film is sufficiently tense, the threats mount nicely, and the twists and turns are enough to engage the viewer throughout.  The Shadow of the Day is worth watching if for no other reason than as a reminder of the importance of guarding our own and everyone else’s freedoms.  And it reminds us yet again of the importance of empathy and kindness in totalitarian times.