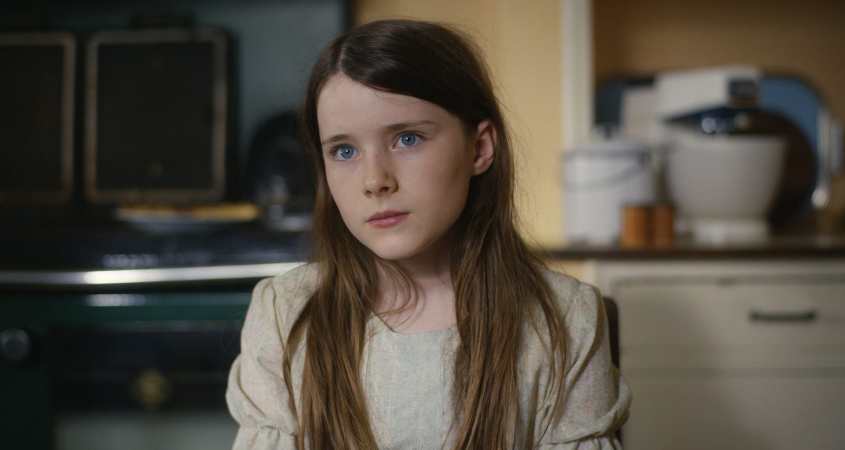 Nine-year-old Cáit (Catherine Clinch) is a very quiet child who avoids others and rarely speaks.  Living in rural Ireland, she is disliked by her siblings, made fun of at school, and neglected by her impoverished parents, Athair (Michael Patric) and Máthair (Kate Nic Chonaonaigh).  Máthair does her best, which isn’t very good; but Athair makes no attempt to hide his indifference to his daughter.

Nearing the birth of yet another child, Cáit’s parents decide to send Cáit away to spend the summer with Máthair’s middle-aged cousin Eibhlín (Carrie Crowley) and her husband, Seán (Andrew Bennett).

Upon arrival Cáit finds herself the object of Eibhlín’s kindness, love, and affection.  Her husband, Seán, is less enthusiastic about having Cáit there, a coldness that Cáit is fully aware of.  She doesn’t understand why Seán doesn’t like her, but she’s used to rejection, so she says nothing.

Over time, however, things change, with Seán coming to love Cáit as much as Eibhlín does.  But when Cáit’s mother finally gives birth and the new school term looms, Cáit is called home.

Catherine Clinch as Cáit is outstanding, managing to reveal the sensitive and tender inner being of Cáit largely through facial expression and body language.  Cáit doesn’t speak much, but she communicates perfectly.

Carrie Crowley as Eibhlín is so tender-hearted and understanding that any child would love to have her as his or her mother, and Andrew Bennett brings to life the deeply hurting Seán, whose heart may be embedded in ice but is amenable to thawing through a child’s understanding, revealing a loving, protective, and caring father.

Mostly spoken in Gaeilge, also known as Gaelic, The Quiet Girl is a real achievement in contemplative Irish cinema.  In turns harsh and hopeless, and gentle and hopeful, the film takes the viewer into the mostly quiet world of a young girl whose future so starkly hangs on whichever way the dice of fate will fall.  The Quiet Girl will stay with you less for its plot than for the subtle ways in which its lead characters find ways, as social beings, to meet one another’s needs, and in that way it makes for rewarding viewing.