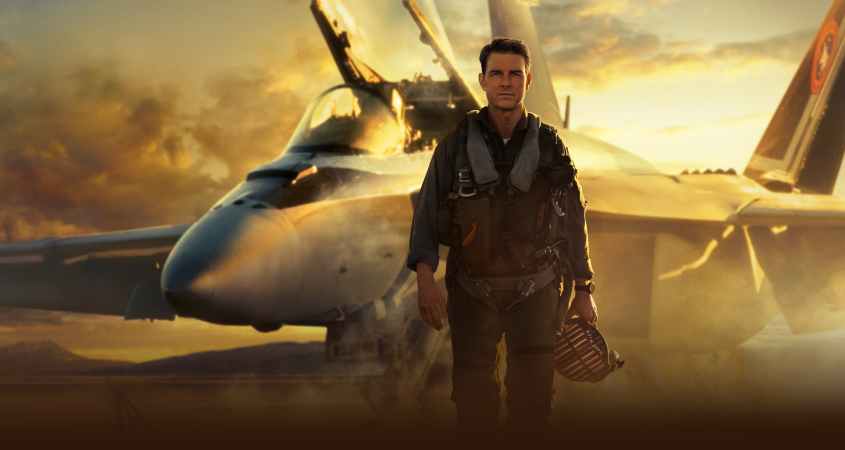 In limbo after one too many acts of disobedience but protected from outright dismissal by the support of Admiral Tom “Iceman” Kazansky (Val Kilmer), Captain Pete “Maverick” Mitchell (Tom Cruise) once again finds himself carpeted and all but dishonourably discharged when he sets out to save a Navy programme by taking an unauthorised test flight.  Maverick remains in the navy, however, because he has been requested  — by Iceman, no less — and given just three weeks to make the cream of Top Gun ready to undertake an urgent mission, striking a heavily defended “enemy” installation.

But one of Maverick’s new students is Rooster, son of Goose, Maverick’s best friend, killed while on a mission with Maverick.  And Rooster bears Maverick a grudge.

When the unexpected makes the mission impossible (sound familiar?) and the strike team is instead assigned a suicide mission, Maverick naturally lives up to his name, disobeying two admirals to flagrantly breach procedure and restore the mission that the strike team could live through.

If you’ve seen the original Top Gun, then Top Gun: Maverick will meet and even exceed your expectations.  It’s about as flag-waving as you’d expect; Maverick’s revived romance with Penny (Jennifer Connelly) may leave you wondering what their mutual attraction stems from; and the plot’s many turns may not especially surprise you, but that’s the worst that can be said of it.  The central characters develop nicely; the backstory unfolds naturally; there is plenty of variety in pace; and the fighter aircrafts’ manoeuvres create an exciting ride.  Brilliant cinematography throughout and a driving soundtrack help make the story and the action utterly engaging; a fine sequel, long awaited, to the original Top Gun.

Screening at Palace, Dendy, and Hoyts, and Limelight cinemas.