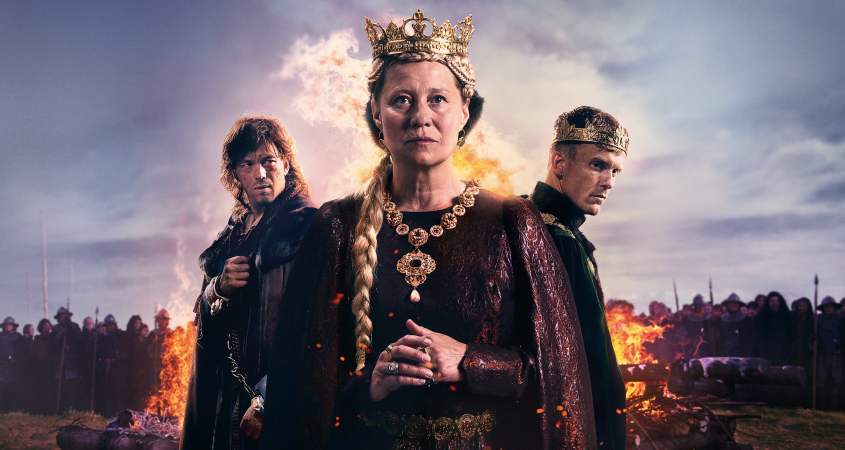 The year is 1402.  It is 15 years since Denmark’s Queen Margrete (Trine Dyrholm) gave her heir, Oluf, a burial following his untimely death, and in the meantime she has a new heir by virtue of having adopted Erik (Morten Hee Andersen), now King Erik, when he was five years old.  Margrete, who knew continual warring while her father was king, made it her life’s mission as Queen to unite Sweden, Norway, and Denmark in a stable peace.  And, under Margrete’s Kalmar Union, the region has prospered through five years of peace — a peace that could be shattered by invasion with overwhelming force by Prussia.

In a few months’ time, King Erik will become betrothed to Princess Philippa of England, a union through which Queen Margrete intends to cement a military alliance that will protect both England and the Union from Prussia’s depredations.

But negotiations for the alliance are halted when a man (Jakob Oftebro) arrives from Graudenz, in enemy Prussia, claiming to be the long-dead Oluf, escaped from long imprisonment and ready to claim his throne.  Margrete is doubtful; Erik wants the man executed for treason.  And the English won’t negotiate the royal marriage while the royal lineage is in doubt.  Undoubtedly the man from Graudenz has arrived at the perfect time for Prussia to avert the military alliance.

But could the man from Graudenz be Oluf?  And, if he is, what can Margrete do to save the Union?

Director (and co-writer) Charlotte Sieling’s first feature film since The Man [Mesteren] (ScFF 2017), Margrete — Queen of the North builds intricately upon a real-life mystery, one that destruction of court documents ensured would remain unresolved.  And the story builds a credible hypothesis as to what may have occurred over the few days of this tectonic drama as truth and pragmatism, history and security, and lies and spies battle for dominance, the entire region’s welfare hingeing on the outcome of a battle for royal legitimacy.  Margrete — Queen of the North combines nice swordplay, great scenery, and fabulous acting in a beautifully filmed, gripping human drama that you won’t forget in a hurry.