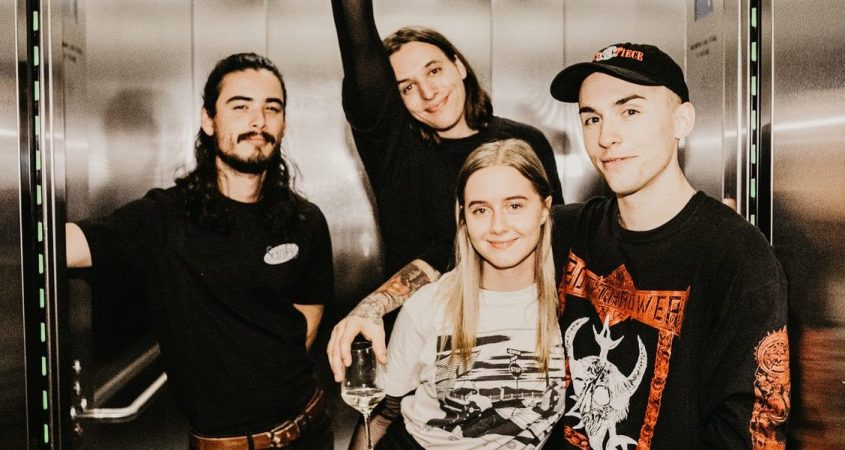 The new track adds to the band’s growing list of triumphs, which include Triple J Feature Artist in 2020, nationwide radio support, and appearances at major festivals alongside Ball Park Music, Joyce Manor, British India, Spacey Jane, Kingswood, Hands Like Houses, The Grogans, Teen Jesus and the Jean Teasers and BUGS.

Sputnik Sweetheart do the Lindy Hop

With Lindy Hop, the band waste no time setting up an imperturbable temperament. A straight kick warpath march segues into a wash of post-punk dark light and kinetic ambience.

We’re taken by the scruff and led from the zest and punch of the set-up to an equally strident verse foundation peppered by a semi-clipped vocal melody that suits the trip we’re on. In fact, as we fall deeper into the controlled vortex, we’re treated to a tantalising visual:

Now we’re running at the speed of light
you are running left,
I’m running right,
you’re out of sight.

Indeed, it seems we are running at such a speed.

Surprises, a breather, a chaotic chorus

But the track opens up to a few surprises, not the least of which is the efficient use of dynamics in the pre-chorus. These dynamics include a cut-time recalibration and a melodic lift from its last two lines. Rather than explode in a manner to which we might be accustomed, it instead tapers down to a brief musical interlude, sans the thick guitar grunt.

A breather is what we have here.

The chorus draws its power from this temporary abatement, giving us an alternate form of aural swirl, no less measuredly chaotic but with vocalist Nette France’s punk seething expanding into the chorus’ focus.

Lindy Hop’s thematic concerns—love in a time of honeymoons and homophobia—wrestle atop the eruptive freneticism of the performances. The pairing is a dazzlingly heady and rewarding amalgamation that will undoubtedly add to the band’s skyrocketing reputation.