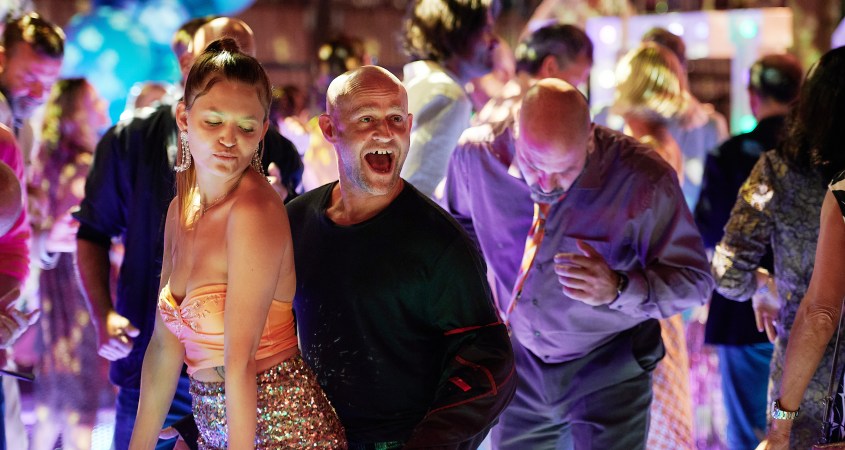 In their younger days, Paul (Christoph Maria Herbst), now a successful author, and Emilia (Christiane Paul), a popular stage actress, lived an adventurous, happy life.  More recently, bound to the routines of parenting three children and feeling their middle age, their close relationship has become a memory.  Paul has forgotten the small gifts of love, even in the bedroom, that would make his wife appreciate him, and Emilia feels undesirable — until she meets Ruben Jacobs (Nicola Perot), prompting her to suggest a “break” from the marriage, which has become a field of unexpressed injuries to both partners.

Following Emilia’s assurance that “It’s just a phase, honey”, Paul accepts the suggestion with equanimity.  But in reality both of them experience some pain even before Emilia — with the support of friends such as Magda (Bettina Lamprecht) and Heike (Barbara Philipp) — becomes involved with the exotic Ruben.  The children are unimpressed, but even they soon fall under Ruben’s spell.

Paul, quietly devastated at these developments; dependent upon the advice of well-meaning friends Theo (Jürgen Vogel) and Jonathan (Peter Jordan); and, like Emilia, seeking to reclaim his youth, is caught on the rebound by Eva (Jytte-Merle Böhrnsen), a long-time fan of his fiction.  But even wild sex doesn’t replace a lost love.

And that’s just the start of their complications.  When will Paul finally lose his cool?

Surprisingly, though very much a comedic crowd-pleaser, It’s Just a Phase, Honey also contains thoughtfully heartfelt moments.  This unusually moving comedy, gorgeously filmed and played to perfection, is one to leave you deeply appreciative of all the history you have shared with the most special person in your life and — via a clever climax — full of smiles as you leave the cinema.