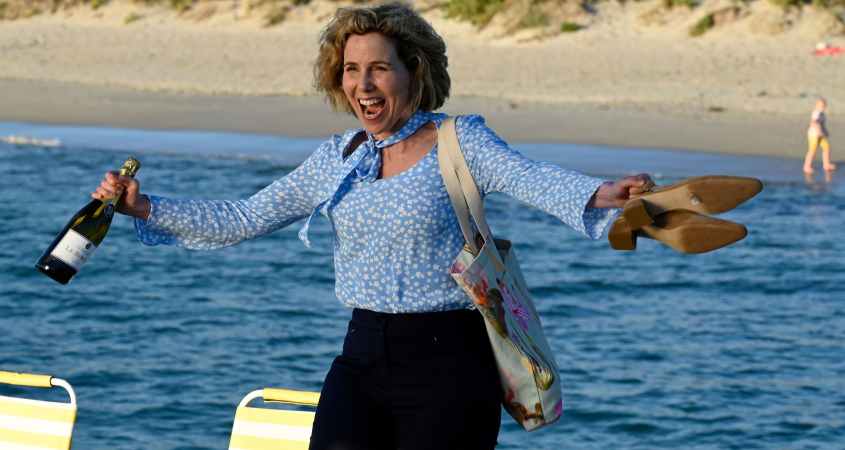 In How to Please a Woman, Sally Phillips plays Gina, whose otherwise unremarkable 50th birthday is marked by losing her job as an insolvency practitioner and finding a male stripper-cum-gigolo, Tom (Alexander England), on her doorstep as a gift from her swimming buddies.  Once Gina takes up Tom’s offer of “anything you want” by asking him to clean her house, she realises that she may be onto a business opportunity, offering housecleaning by men for women.

In fact, Tom has just taken up this work in expectation that Gina’s former employer will be winding up the business of his own employer, Steve (Erik Thomson), as a removalist; so Gina puts her business idea to Steve and his team, acquires the business before it is closed down, and lets her swimming buddies know of the opportunity to have their homes cleaned by a man.  But they have other ideas about how to use an attractive man!

When Gina is eventually persuaded to let the customers decide what they want, she doesn’t realise quite how hot the water may get.  It’s tricky to navigate people’s needs, but this isn’t a great problem, as in fact Gina’s sensitive, discreet nature allows her customers to express those needs. The major problem may be the long arm of the law.

A film dealing with frustrated female sexual desire and women’s solutions to it risks turning either cringey or preachy.  How to Please a Woman, I’m pleased to report, does neither.  In this jolly tale, beautifully filmed and edited in Western Australia, Renée Webster has created, as her writerly and directorial feature-film debut, a warm, funny, visually appealing masterpiece of tasteful comedy that is risqué without crassness and sensitive without prudery; a kaleidoscope of clever double entendres, honest sexual conversation, and lovely character studies that fulfills the great comic potential of a taboo topic.

Gradually focusing on the relationship between two unlikely protagonists and providing a refreshing take on a frustration all too common, How to Please a Woman manages to maintain the laughs throughout; it is, before all else, very funny.