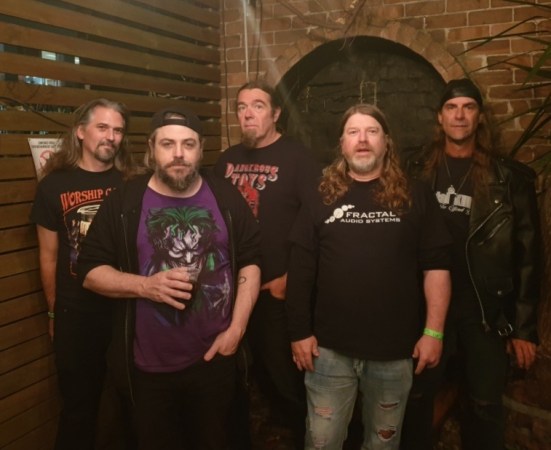 The five-piece progressive metal band from Canberra, Taliesin, has released the album Faceless. Originally formed in 1995, the band’s first album appeared in 2007 (The Tally of Lies and Sin) though there followed a long period of inactivity and personnel changes before the current line-up was solidified.

The band, Dave Howe (vocals), Richard Moseley (guitar/keys/ vocals), Reuben Durham (guitar/keys/vocals), Chris Turk (bass, vocals) and Wayne Bateup (drums), aims high here—a concept album about a serial killer with the condition known as prosopagnosia (face blindness) who believes that his condition is the reason for why he is how he is.

The character first appears on Simple, the final song of the band’s debut collection. On Faceless, the subtle and not-so-subtle style swerves across the range of songs reflect the concept album ethos. This bridges a broad sweep narrative that perhaps can only operate when approached in this manner.

Taliesin spin a tale of terror

It is evident from the album’s opener, Awakened by Darkness, what we’re in for; that the musicians’ skills are up to the task of a ‘progressive metal concept album’ is immediately apparent. This track points to what is impressive about this musical venture; accessible melodic lines supported by a metal slash progressive hard rock underpinning, the power balance of this relationship alternating with the use of varying dynamics.

During some songs, these elements jostle or flow effortlessly into one another, but one always gets the sense that they are emitted from the same source. This source comprises musicians whose skills are evident—in the performance department and the songwriting.

At times it’s viscerally searing, such as in My Sleeping Prize. Its more traditional metal tropes provide a stalwart facet to the established whirlpool of shades.

Elsewhere, Taliesin generate a more sombre form of majesty, as revealed on the tracks Reflection and Faceless Women, with their juxtapositions of bleakness—the lyric—and orchestral like confluences.

The album is cohesive in its application. One gets a good sense of the narrative arc, even if one is focusing merely on the music alone. There are diverging intensity levels, too, as one expects from such a record. The kinds that undoubtedly reflect the band’s studious intent and admirable creative ambitions.

For more on Taliesin, head to their Bandcamp page.