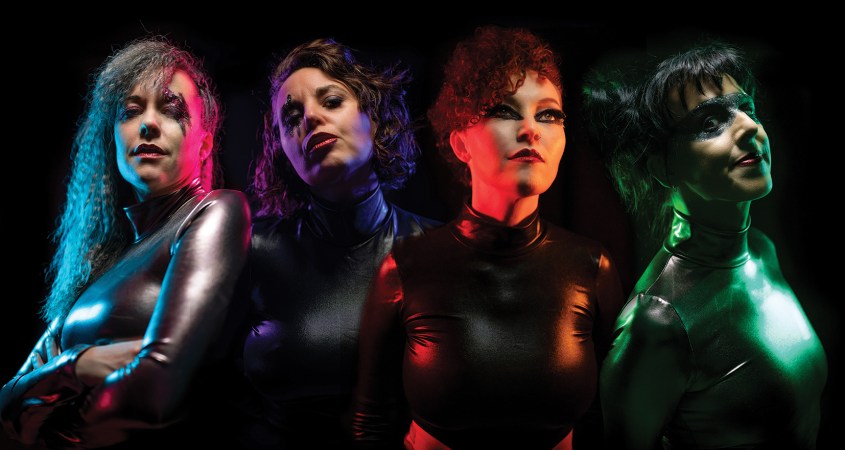 The all-female 4-piece powerhouse mishmash of glam punk rock, metal, and pop that is Glitoris return for a rollicking gig at The Basement.

As it’s been awhile between proverbial drinks, BMA decided to catch up with the band to see what’s what.

There’s future plans, an awkward encounter with a beloved Aussie band, and even a near death experience to learn about…

A sparkling nod to female empowerment, and the fact we were adorned by only glitter back in the day (it soon became a logistical nightmare).

We formed for a one-off gig at You Are Here Festival in 2014. People seemed to like it. So did we.

A compelling mishmash of glam punk rock, metal, and pop.

Head over to glitoris.bandcamp.com and check out The Slut Power Sessions – Live at The Basement for some tasty live versions of The Policy, Slut Power and Pole (look you might as well listen to the whole thing).

What are your influences, musical and/or otherwise?

Mickey: My first drum lesson was a VHS of Neil Peart. I was raised on Gospel music but idolise Tool for fucking with time signatures, and if I could ever play like Joey Jordison I’d literally die of happiness.

When we accosted Regurgitator in their car to give them vegan brownies in a heart shaped box. It was the most cringe fangirl moment of our lives.

The buzz. The power of the music. The people are real. We all support each other and have a bit of a larf.

When we didn’t die on Macquarie Pass at night, on our way back from a Wollongong show with a ute full of gear. We were lost and Malcolm was driving. ”I’ll just pull over” she said, steering the ute towards a cliff edge… We lived to tell the tale.

We’re recording our sophomore album later this year, and will then make up for lost touring time in a big way!

Keven makes everyone laugh. Malcolm and Andrew on band camp after one-too-many gins. Mickey’s ‘inside voice’.

The myriad ways that violence against women is perpetuated all over the world. The politicising of – and cruelty towards – Trans people and children. The wealth gap. Prisons. Government inaction on climate change, Indigenous health, and self-determination, and DV.

At The Basement on Friday, 27 May with Lulu and the Tantrums and Raising Ravens.