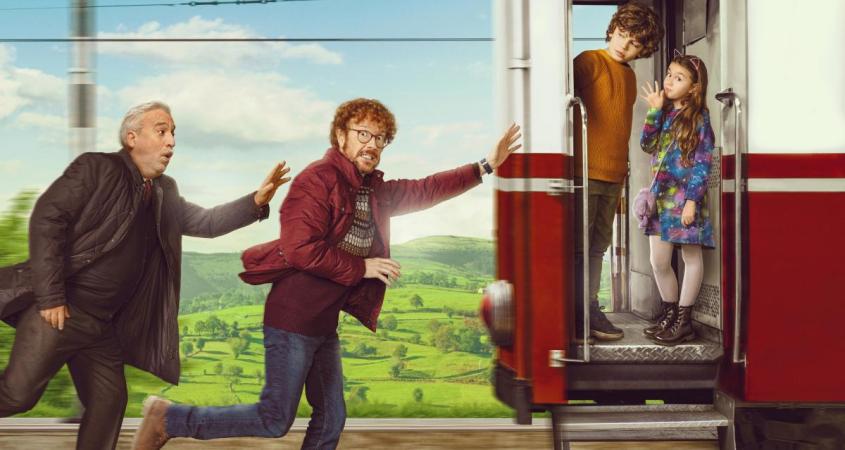 His life falling apart, Ricardo (Santiago Segura, who also directed the film) seizes an opportunity to take his son, Marcos, on a rail journey to Asturias.  But it’s not only Marcos who’s taking the trip.  Other families have piled their children on with the expectation that Ricardo and his friend Clara (Paz Vega), who is taking her two children on the train, will look after their children as well.  Ricardo does not want the responsibility for anyone else’s children, but he’s relying on Clara, who’s more than adequate to look after a bunch of kids.

Unfortunately, at the last minute Clara can’t make it.  She assures Ricardo, though, that she’ll find a stand-in.  Ricardo is landed with seven children — a terrifying responsibility — as well as Clara’s stand-in: her father, Felipe (Leo Harlem).  Unfortunately, Felipe is not a responsible adult but rather a scurrilous ratbag who treats the law as something merely to duck.

When Felipe and Ricardo miss the train’s departure — with the kids aboard — catching up with it should be simple… but events have conspired to leave them with no money.  And this is where Felipe’s skills in creative illegality begin to pay off in madcap near misses — and where the kids find an entire train in which to express their propensity for mischief.

The Kids Are All Right has its weaknesses.  Our introduction to Ricardo’s character is a little laboured, mostly due to overwrought acting by Segura — who may have been too busy acting to bring out the best in the child actors too.  Acting weaknesses aside, this lighthearted romp — a quick remake of the 2021 Belgian film Attention au départ — will entertain the entire family with a slew of daring gags, disparate characters, and creative if utterly irresponsible answers to the little problems that a promising day can spring.