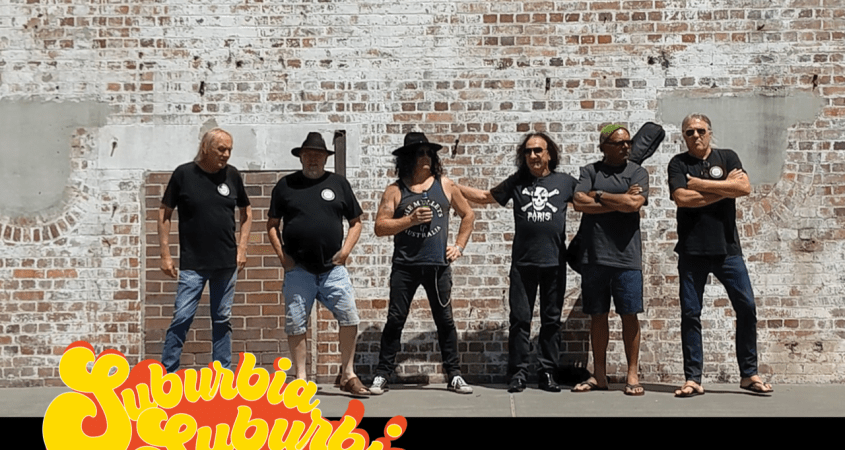 Australia has a long-standing tradition of producing notable and credible rock bands that are as singular and dissimilar as the land in which they’re born. Think AC/DC, Rose Tattoo, and The Angels. Bands whose sound incorporate the raw and unfiltered, and to a certain extent for some of them, utilised subtle humour to help reinforce their delivery.

A relatively new band on the block of this highly esteemed classic Australian rock genre is SuburbiaSuburbia.

With several singles and an album, Landfill, released since 2020, the band’s new release Bruce Hwy Elbow is another conspicuous addition to their output; a blues-rock hybrid set to an intriguing lyric.

When the song’s opening lines are:

…you know you might be in for a little more than just a round of hard rock regionalism.

Though SuburbiaSuburbia’s shtick is more blues-based than hefty rock—the harp, for example, is crucial to the band’s sound. The Bruce Highway is one of the world’s most dangerous highways and known as the ‘Highway of Shame’, the region’s number one crash zone. SuburbiaSuburbia has now immortalised it in song.

SuburbiaSuburbia & The Tale of Environmental Sadists

As the band says about the new release:

“The song is about a couple of environmental sadists who are injured by a tree lopping exercise. They hit the highway, driving north in search of something new. They reach a farm only to find a gas drill rigging operation gone mad. The farmer’s property drought-ridden and on fire.

“As the smoke rises, they meet the owners, who now have nothing. Did running away change anything?”

That’s quite a narrative. Luckily the track has six minutes to tell the environmental sadists’ curious tale.