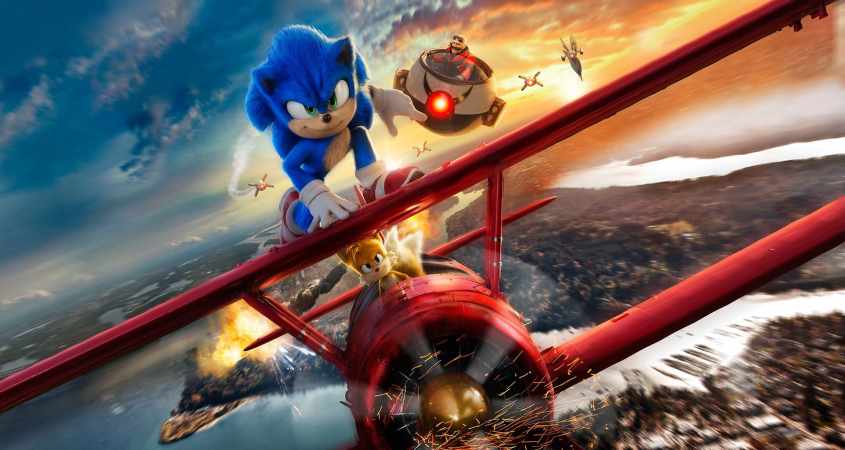 In case you were elsewhere when the original Sonic the Hedgehog screened on Earth in July 2020: Sonic (voiced by Ben Schwartz), the fastest being alive, is a young refugee from a distant planet.  After becoming part of the family of policeman Tom (James Marsden) and his fiancée Maddie (Tika Sumpter), Sonic eventually managed to permanently strand his evil nemesis, Dr Robotnik (Jim Carrey), on a planet inhabited largely by mushrooms.

Or so it seemed.

The evil genius Robotnik has been devising an escape route that will take him to planet Earth to wreak vengeance against Sonic, no matter what collateral damage might follow.

But unexpectedly Knuckles the Echidna (voiced by Idris Elba), the last member of a warrior race, arrives on the planet and, believing he has found an ally in his own quest to destroy Sonic, facilitates Robotnik’s escape.

Beneath the seemingly same goal, though, lie two very different motives.  Knuckles is bent on destroying Sonic to avenge his ancestors and restore honour to them.  Robotnik wants to take over the universe.

Making intriguing references to present-day villains and their nefarious plans (appropriating Donald Trump’s slogans and heralding a “new normal” devoid of humanity), Robotnik sets himself up as the superior being whom Earthlings and others alike will worship.  But he has some competition in Knuckles — and it would take a lot to slow Sonic down.  Though still a child himself, Sonic wants to become a hero; and it seems that both Robotnik and Knuckles will give him every opportunity to do so.  On the other hand, help comes in the form of somebody else who has kept an eye on him: Tails, the twin-tailed flying fox (voiced by Colleen O’Shaughnessey).

The film’s three animated characters blend into the live action, as in the original Sonic, perfectly, with perfectly lifelike interactions between animation and live actors.  The conflicts between Sonic, Knuckles, and Robotnik turn on some very funny moments.  Jim Carrey’s Robotnik is, of course, larger than life, and is helped along by some very special technology.

Interaction between the human characters is especially amusing in their justified wariness of the mayhem that Sonic’s innocent heroism can cause.  And the truth is that where Sonic goes, mayhem is never far behind.

The film is not all action: it acquires some depth as the characters of Sonic and Knuckles grow through their conflict.  Yet the plot of Sonic the Hedgehog 2, as of the original Sonic, is straightforward enough for young children to follow.

The film’s insertion of three superbly animated characters into live action has repeated the seamless technical finesse of the original, with perfectly realistic interactions between live actors and their animated co-stars.  Large-scale location shooting and good variety in pacing keep it lively, interesting, and unpredictable, and the film’s fine scripting has made of a family film another comedy worth seeing at least once.