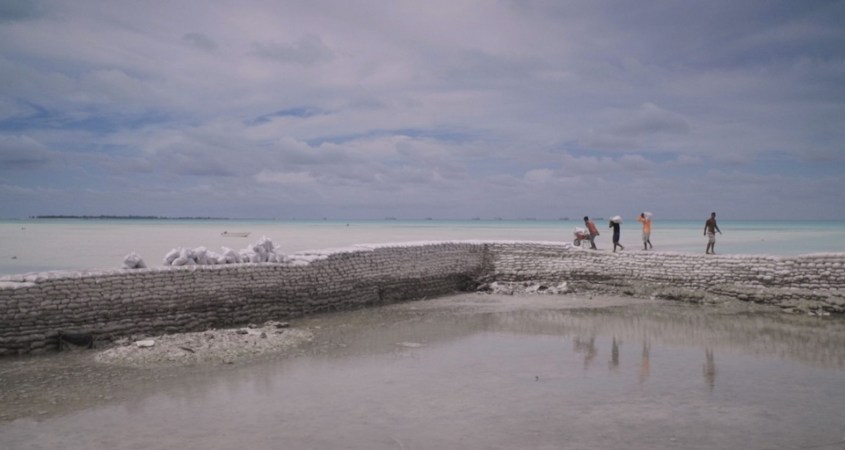 Activist sentiment in averting climate breakdown and ecosystem collapse predominates in The Magnitude of All Things, in concerned citizens ranging from Greta Thunberg to the indigenous peoples of Canada, the Amazon, and Australia; various scientists; and the former Kiribati president Anote Tong; and what are most refreshing about these expressed sentiments are their clarity and wisdom.

Reflecting deep consideration of what has fuelled the crisis and the resultant conflagration in its political, scientific, and spiritual dimensions, these voices call upon us to stay awake, to look around, and to engage.  As one of Abbott’s interviewees points out, the dominant narrative has jumped directly from outright denial of the problem to the futility of attempting to prevent or overcome it.

In making this extraordinary documentary, Jennifer Abbott has put two quite different stories together, uniting them through the theme of grief.  One story follows her sister Saille’s breast-cancer diagnosis, treatment, and subsequent death; the other follows activist responses to governmental climate apathy.  It’s an interesting angle from which to tackle climate inaction; and the activists’ sentiments are easy to relate to and, more than that, are by and large expressed beautifully.  Interspersed amongst them, the Abbott sisters’ own words too illuminate aspects of our own personal stories and do so beautifully.

With the most significant commonality between these two very different stories — the false dichotomy between denying a problem and accepting defeat by it — remaining merely implicit, the editorial decision to combine the two stories has an ambivalent result.  Abbott’s intermittent voiceovers document Jennifer’s and Saille’s journeys to accepting Saille’s terminal cancer prognosis, and urge the listener to accept what is “real”.  Yet the film’s major purpose is not to induce acceptance of a success–failure dichotomy and subsequent defeat in the sphere of climate breakdown; it is rather to provoke anger and effective action to avert such defeat.  Yet the story combination appears to represent these contrary sentiments — acceptance and rejection of defeat — as though they were, if not identical, then at least utterly consistent.

For coherence, the personal cancer journey would better serve as a discrete story whose distinct philosophy of acceptance cannot be misconstrued as a metaphor for climate apathy or defeatist propaganda.  These two very different stories of opposing sentiments clearly belong within different covers.

Partly this relates to which audiences the film is aiming to address.  But for the most critical audience — those who recognise the problem but who already feel defeated — and even for those who didn’t realise quite how critical action today has become, a film seeming to urge acceptance of what is may unnecessarily drain energy from what could be.

All that said, discerning one message from the other is possible for the actively critical viewer, and the film’s use of spectacular footage as well as articulate interviews with everybody from Amazonian dwellers to the founders of Extinction Rebellion offers a fresh look at our attitudes and approaches to climate vandalism and at the depth of the commitment to real change that Abbott’s interviewees evidence.  So, for the viewer who can read the two stories separately, the film offers two worthy documentaries for the price of one.

Completing the 2021 Stronger Than Fiction (STF) documentary series, The Magnitude of All Things will rescreen at 7:00 p.m., Friday 8 April, at Dendy Cinemas Canberra Centre.  The 2022 series will commence in June or July, and it’s possible to sign up for news of it at the STF web site, https://strongerdocs.com.