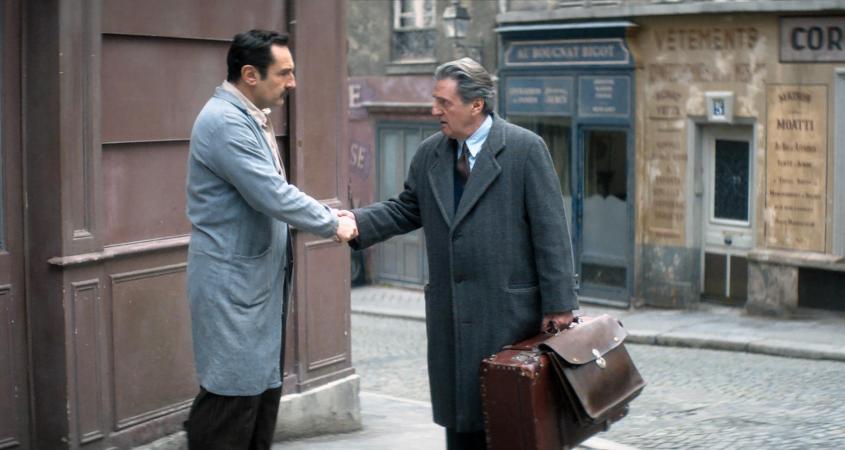 Since June 1940, Paris has been occupied by the Germans.  Now, in 1941, it’s clear that things are going to get even worse.  Jewish people are now required to identify themselves to the German occupiers and are being taken to Germany “to take part in work programs” — including the elderly, children, and babies.

Talented Jewish jeweller Joseph Haffmann (Daniel Auteuil) fears the worst and decides to move his family to the unoccupied zone whilst it’s still possible.  He organises for his wife and three children to escape, promising to join them as soon as he has secured the future of his shop — a future that doesn’t include confiscation by the Nazis.  To this end he signs over ownership of his shop and home to his employee François Mercier (Gilles Lellouche) with the gentlemen’s agreement that once the war is over they will reverse the process.  The humble Mercier agrees, and he and his wife, Blanche (Sara Giraudeau), who isn’t happy with the scheme, move into the Haffmann residence.

Having made his arrangements, Mr Haffmann leaves, only to discover that his escape route has closed.  With no other choice, he returns to his shop to hide until his next chance to leave.  But then things get complicated and tense as what began as a gentlemen’s agreement based on decency and trust gradually turns into something quite different.

The performances by Daniel Auteuil as Joseph Haffmann, Gilles Lellouche as François Mercier, and Sara Giraudeau as Blanche are outstanding in conveying how each leading character faces the external threat of the Nazis and the internal threats arising from the relationships between the three of them.  Rich in moral and ethical complexity, Farewell, Mister Haffmann shows us the distortions of human relationships and behaviour that arise as competing desires mount, pressures rise, and one person’s decisions irrevocably change the course of another’s life.  It does so through attention to the subtlest gestures and facial expressions, and its apparent authenticity emerges in attention to the smallest details of costumes, shop fittings, furniture, signage, props, and, critically, speech patterns and social behaviours reflecting French society of the period and the invaders’ indifference to the welfare of the French and heartlessness toward those they identify as Jews.

To get the most from the film, don’t let anyone tell you how it turns out; rather, experience this masterpiece of dramatic cinema and its conclusion without preconceptions.