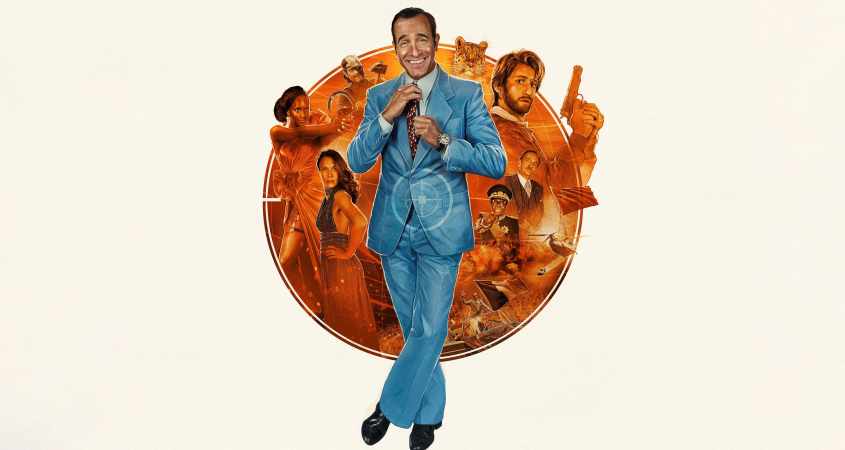 Suave, handsome, sophisticated, and irresistible to women — at least by his own assessment — staunchly patriotic French secret agent Hubert Bonisseur de la Bath, a.k.a. agent OSS 117 (Jean Dujardin), is at the top of his game.  He laughs in the face of his Russian captors as he outwits them and escapes through feats of derring-do, gives his gorgeous saviour generously of his amour, then returns to base to the applause of his fellows.  When OSS 117 swans into his boss’s office to receive even more accolades and his next assignment — one rather more sedate than saving the world at the coal-face — he’s introduced to young recruit OSS 1001 (Pierre Niney), who’s being sent into Africa’s dark heart to quell the rebels and ensure the re-election of France’s “friend”, President Bamba.

When things fail to go to plan, OSS 117 is called on to turn around disaster and deliver the goods for France.

Off goes our heroic but sexist, racist, out-of-touch OSS 117 to Africa, where he certainly makes his mark, including with President Bamba’s wife, Zéphyrine Sangawe Bamba (Fatou N’Diaye).

Jean Dujardin as OSS 117 has it all — a fantastic face that he knows how to use to excellent effect; great timing; and an affability that makes his sexism and racism entertaining rather than embarrassing and his self-love and arrogance naïve rather than nasty.

Pierre Niney’s OSS 1001 conveys well the up-to-date highly trained agent on top of the modern world, one who, disillusioned of his hero-worship of OSS 117, must somehow manage OSS 117’s limitations to complete the mission successfully.  He does his best!

Habib Dembélé as President Koudjo Sangawe Bamba is just perfect as the almost certainly corrupt leader of his country.  He manipulates with smiles and laughter, and all the time you can just about feel the point of the knife in your back.

And Fatou N’Diaye as Zéphyrine Sangawe Bamba is whip-smart, tough, and formidable.  She’s definitely someone you’d better not mess with.

With great action scenes, wonderfully wild vistas, sets ranging from crushing street markets to palatial splendour, fantastic encounters with wild animals, and plenty of humorous rough stuff, OSS 117: From Africa with Love is absolute fun from start to finish: clever, witty, and almost entirely devoid of the uncomfortable slapstick that can spoil parody, it’s a dose of laughs you don’t want to miss.